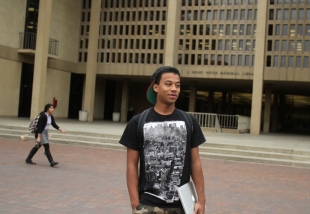 Joseph Thornton, a graduate of Eastside Prep, stands outside of the Meyer Library at Stanford University, where he is busy studying for upcoming finals on December 3, 2013. It is Thornton's first semester at the university. Photo by Veronica Weber.

Like this comment
Posted by Palo Alto Resident
a resident of Leland Manor/Garland Drive
on Dec 6, 2013 at 11:26 am

I volunteer SS a tutor at the Project read Adult Literacy Program. One of my students, who only had 6 years of schooling in her native country, has enrolled her three children at Eastside Prep. Her two oldest are now on full scholarship at UC Riverside-one studying pre-law the other engineering and her youngest is in 9th grade. Her children have traveled the globe and have excelled. Hip Hip Hooray for Eastside Prep.

Wonderful reporting on all the great things East Side Prep is doing!

My husband and I have been tutoring in the middle school reading program (mentioned above) for many years. The program is amazing, and it always welcomes new tutors. If you, reader, found this article even slightly interesting, go visit Eastside and ask for a tour - you'll be glad you did! It's inspirational.

The reading program is very flexible. Most of us tutor just once a week, and we fill in for each other if other tutors need to be away.

And the kids are GREAT!

What a great story! All the best to the teachers, kids and volunteers!

What a wonderful article! I teach 5th grade at EPACS and have many eager Eastside applicants this year. Thank you to all the teachers, administrators, volunteers, and donors that make this incredible work possible.

As a young man and resident from East Palo Alto it makes me proud to hear that institutions like Eastside are
preparing students to go to a four year university and helping my community.

As a former director of Stanford's teacher Education Program it was my pleasure to have both Chris Bischof and Helen Kim as students while they were obtaining their teaching credentials. Chris wrote a spectacular honors thesis as a Stanford Undergraduate that was a visionary blue print for a community that did not have a public high school (at that time). He formulated this amazing educational concept while tutoring young men in a highly motivational after school program that linked basketball and homework. I was honored to be one of the founding board members of Eastside Prep, and I know of very few Silicon Valley entrepreneurs who have been more successful than Chris Bischof. His vision of a Silicon Valley "start up" in East Palo Alto devoted to the college preparation of local students is remarkable, and the fact that Helen Kim shared his goals has resulted in one of the most exceptional schools ever created in America. As noted, Eastside has been graced by an exceptionally dedicated board; they are understated leaders in educational excellence, and the Eastside story of academic success has captured the attention of generous philanthropists who have consistently supported Chris and Helen's efforts to provide access to higher education for students and families that might otherwise have limited opportunities to obtain outstanding teaching for their children

Report Objectionable Content
Email Town Square Moderator
Like this comment
Posted by PAUSD Falling Behind
a resident of Another Palo Alto neighborhood
on Dec 8, 2013 at 12:52 pm

Why can the administrators at East Side teach our PAUSD administrators to set the expectations high for all Students in PAUSD even if they come from EPA, are Latino, African American, or belong to a minority group?

But "confidence-building ï¿½ defining students as intellectuals and scholars ï¿½ is a huge part of the culture," said Marianne Chowning-Dray, who taught calculus at Gunn High School for nine years before joining the Eastside faculty in 2005.

"It's assumed that everyone will participate, everyone can do this, that all students can achieve at a high level. We don't take no for an answer," Chowning-Dray said.

Take that, Radu Toma [portion removed.] I for one have not forgotten that letter nor that this school board did nothing and you are still the Math IS at Paly.

We are a "freshman" Eastside College Prep family who on bended knees thanks God everyday for the blessing that Eastside has been and continues to be. Thank you Chris, Helen, all the faculty (especially residential faculty), and extended staff for your grit, passion, dedication, motivation, encouragement, support. Words alone fail in our families expression of gratitude.

I often leave the Eastside campus awe-struck as a witness of the many tireless education warriors. You guys not only light the torch you continue to carry it very far.

Thank you Eastside students for your continued passion to rise and surpass the bar that Eastside sets for you.

I was a member of Eastside's 7th graduating class in the year 2006. To this day, I can say that Eastside's commitment to my personal growth definitely changed my life for the better. In 2010, I graduated from MIT with a Bachelor of Science in nuclear engineering. This past May, I graduated from UC Berkeley with a Master of City Planning, focusing on economic development. I have dreams that someday my education will prepare me for a high position in energy leadership. These dreams would not be possible without the impact that Eastside had on my confidence and self-awareness. Having grown up in East Palo Alto, nobody ever believed in me as much as my teachers from Eastside did. Someday, I hope to repay them for the wonders they have brought to my small, poor community. Helen and Chris are truly a blessing for East Palo Alto.