Stanford scrutinized over deputy who drew gun on Black man
Stanford police are receiving scrutiny after an officer drew a gun on a Black driver over the weekend, an incident that has... Last comment 20 hours ago | 15 comments

Developer looks to demolish The Fish Market, build 380 apartments
The two buildings on El Camino Real in Palo Alto that currently house the Fish Market and a McDonald's restaurant would be... Last comment 24 minutes ago | 41 comments

An Alternative View
by Diana Diamond
Can the Memphis police behavior ever happen here?
Feb 1, 2023 | 7 comments

A New Shade of Green
by Sherry Listgarten
Doing more with the natural spaces we have
Jan 29, 2023 | 8 comments

"Addison joins Climate Strike"
The three fifth grade classrooms from Addison Elementary School walked to Palo Alto City Hall on Sept. 27 to deliver a packet of letters expressing their concerns about climate change. City Council member Alison Cormack joined them and engaged them in a great conversation. She then gave them a tour of the Council Chambers and explained how Council meetings work. Submitted by Jocelyn on Oct 15, 2019 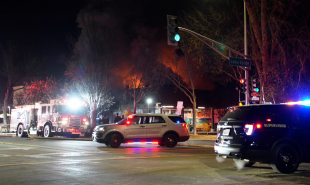 Palo Alto looks to crack down on gas-powered leaf blowers

Nearly 20 years after Palo Alto adopted a ban on gas-powered leaf blowers in residential areas, the appliance and the public opposition to them remain as loud as ever. Now, the city plans to take action. Thursday, 9:30 AM

Santa Clara County will close its mass COVID-19 vaccination and testing sites by the end of the month as they are no longer essential to the county's pandemic response, county officials said Wednesday. Wednesday, 4:50 PM

Despite a federal deadline, California -- the largest user of Colorado River water -- has refused to cut back as much as six other states proposed in a new plan. Thursday, 9:45 AM

The two buildings on El Camino Real in Palo Alto that currently house The Fish Market and a McDonald's restaurant would be torn down and replaced with a seven-story housing complex under a new proposal. Tuesday, 3:50 PM | 41 comments

A child was attacked by a mountain lion in unincorporated San Mateo County, the Sheriff's Office announced on Tuesday. Wednesday, 9:43 AM

Since the Jan. 23 mass shooting that killed seven people on two Half Moon Bay mushroom farms, roughly 40 residents who lived on-site have been staying in hotels, with no estimate of when they can return. Tuesday, 1:55 PM | 1 comments

Stanford scrutinized over deputy who drew gun on Black man

Stanford police are receiving scrutiny after an officer drew a gun on a Black driver over the weekend, an incident that has gained national attention following a viral Twitter thread from a witness. Tuesday, 9:54 AM | 15 comments

Janitors get a boost as Palo Alto firms up labor rules

The Board of Supervisors honored the victims of last week's mass shooting in Half Moon Bay to start its regular meeting on Tuesday, as supervisors pledged to improve living conditions for farm laborers. Wednesday, 9:23 AM

Got sandbags? Don't discard them just yet