Peek inside the fine-dining Selby's, opening in Redwood City this summer

The restaurant group, which operates Mayfield Bakery & Cafe in Palo Alto, The Village Pub in Woodside, Spruce in San Francisco and other local establishments, announced this week new details about the forthcoming 10,000 square-foot restaurant at 3001 El Camino Real. The address is located in Redwood City, though a press release describes Selby's as in Atherton. The restaurant is named for the nearby street, Selby Lane.

Bacchus Management took over the space after the longtime Chantilly’s closed in 2017. 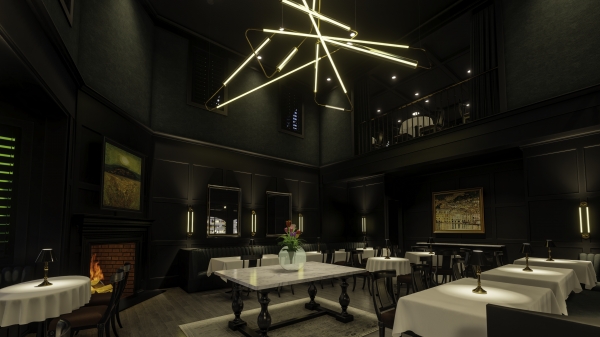 Selby's is "inspired by Hollywood's glamorous dining scene of the 1930s and 1940s," including Los Angeles restaurants Chasen's and Romanoff's. There will be dishes prepared table-side, like a dry-aged duck for two and flambéed desserts, plus that roving cart that will serve gin, vodka and Vesper martinis.

Bacchus Executive Chef Mark Sullivan is developing the menu. Think opulent dishes like a "Black Label" burger, a "modern take" on a lobster Newberg (typically made with butter, cream, cognac, sherry, eggs and cayenne pepper) and steaks and chops from Flannery Beef, whose owner carefully selects and dry-ages premium beef from all over the country. Vegetables will come from Bacchus' private farm in Woodside, which supplies all of its restaurants.

Bacchus claims that Selby's will offer "one of the most substantial opening wine lists in the United States in the last 15 years," with a selection of 3,000 to 4,000 international wines – the equivalent of 15,000 to 20,000 bottles. The list will focus on vintage Italian, Spanish, French and California wines. The bar will also serve a "rare" selection of bourbon and scotch.

But Selby's will aim to serve business and special-occasion dinners as much as casual meals at the bar, the press release states. 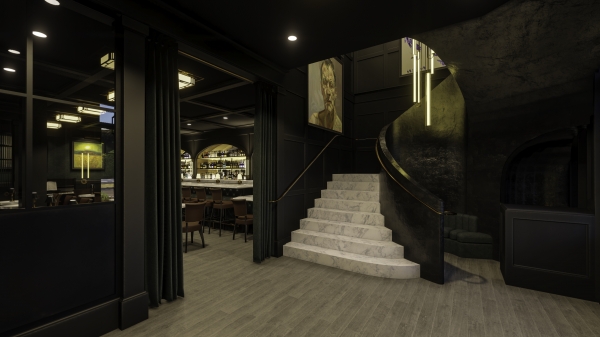 A rendering of the interior of Selby's in Redwood City. Image courtesy Bacchus Management Group.

There will also be custom contemporary and vintage artwork throughout the dining and bar areas, curated by San Francisco-based Lost Art Salon; a bespoke 20-foot chandelier hanging near the entrance; and a custom chandelier in the main dining room. The space also offers three private dining rooms.

Tim Stannard, Bacchus' founding partner, said in a previous interview that he hopes Selby's will, like The Village Pub and Spruce, earn one Michelin star and a Wine Spectator Grand Award, the magazine's highest award.

"Our goal is to be of one-star Michelin quality right out the gate," he said.

Selby's will be open daily for dinner only from 5 to 10 p.m.

So much beef is a registered user.


It is surprising and disappointing that a new restaurant in this day and age, in this hub of innovation, is continuing to promote beef to such an extent. When are we really going to understand that global warming is ours to solve. Or not? There are plenty of delicious and luxurious foods that are not doing such harm to our planet as beef.

Report Objectionable Content
Posted by Oh Please, a resident of Woodside,
on Apr 18, 2019 at 7:17 pm


Disappointing to you, and surpising to no one.

Report Objectionable Content
Posted by boo, a resident of another community,
on Apr 22, 2019 at 12:39 pm
boo is a registered user.

Report Objectionable Content
Posted by lslerner, a resident of Woodside,
on Jun 1, 2019 at 4:04 pm


We celebrated our 50th anniversary in December 2009 with a party of about 20 at Chantilly, and Selby's looks like a good place for a 60th-anniversary follow-up in December 2019. The proposed menu looks promising, though I miss the wonderful sweetbreads and veal dishes at Chantilly.
Management: Please contact us when you open!

Report Objectionable Content
Posted by Really?, a resident of University South,
on Jun 7, 2019 at 8:46 am

Report Objectionable Content
Posted by Steve S, a resident of Atherton,
on Jun 8, 2019 at 5:51 pm


Happy to hear about the planned extensive beef line-up. I only go to restaurants that have beef on the menu. The anti-beef person can go to a non-beef serving restaurant.

Report Objectionable Content
Posted by rubysparkle, a resident of Professorville,
on Jul 8, 2019 at 7:48 pm


Sounds fabulous! I miss the elegance and ambiance of Chantilly! I love an adult, spectacular dining experience. I really miss Ernies in San Francisco. So happy this is coming to town. Lucky us!

How Much Time do You Spend Outdoors?
By Chandrama Anderson | 0 comments | 1,538 views