Uploaded: Sep 3, 2020
Santa Clara has joined several Bay Area cities in adopting a temporary cap on the fees third party delivery apps can charge restaurants, which owners say can be prohibitively high and eat away at revenue that's already been drastically reduced during the pandemic.

The Santa Clara City Council unanimously approved on Tuesday an emergency ordinance implementing a 15% per-order cap for food delivery companies like DoorDash and Grubhub. The temporary measure aims to "accomplish the legitimate public purpose of easing the financial burden on struggling restaurants during this emergency while not unduly burdening third-party platforms," the ordinance reads. 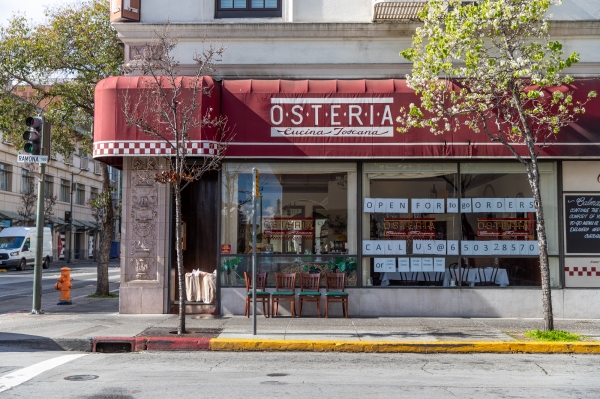 Signs in the window of Osteria Toscana in Palo Alto promote the restaurant's takeout and delivery options. Photo by Magali Gauthier.

"Several restaurant owners told me they are facing fees as high as 30% from these third-party food delivery apps," Mayor Lisa M. Gillmor said in a press release. "Many of them have no choice but to pay these fees due to their current reliance on delivery orders. Now, the city is enacting this ordinance to help our struggling restaurants stay in business during the pandemic and beyond."

Navin Tekchandani, an owner at The Yellow Chili in Santa Clara, told the council that the modern Indian restaurant is now relying heavily on delivery orders after its usual source of revenue -- corporate meals and consultants traveling to Silicon Valley for work -- dropped off during the shutdown.

Some local restaurants have started offering delivery themselves and many urge customers to place orders with them directly and pick them up to avoid the delivery fees.

The ordinance applies to all restaurants in Santa Clara, regardless of where they're delivering food, staff said. It took effect immediately, but if a delivery company charges a fee higher than 15% between Sept. 2 and 9, they won't be considered in violation of ordinance if they provide a refund to the restaurant before Sept. 19.

The delivery cap will remain in effect in Santa Clara until the end of the city's COVID-19 state of emergency.

"30% is not acceptable when their revenue has gone down," Councilmember Raj Chahal said of restaurants. "This is in the right direction."

JS is a registered user.


"Some local restaurants have started offering delivery themselves and many urge customers to place orders with them directly and pick them up to avoid the delivery fees."

Wow! How ingenious and truly a market disrupting concept!!!

Seriously, why is the government getting involved with this? A restaurant or group of restaurants in near proximity can hire their own driver at a lower rate. Many restaurants do that currently and have done so in the past. Next up is the government limiting the amount of tip a customer can leave as it takes money away from the customer.

Report Objectionable Content
Posted by Steven Goldstein, a resident of Old Mountain View,
on Sep 4, 2020 at 11:26 pm
Steven Goldstein is a registered user.


If the Uber/Lyft ballot measure fails, these delivery services will be likely closed.

I for one want the restaurants to hire their own delivery people.

Outsourcing to the Third parties simply makes earnings less for the whole of the delivery drivers in the end. Why would anyone give a tip to a Door Dash or GrubHub, when they aren't making the food?

The Third parties are simply making money on an illegal business plan.

How we eat away at our open space, even in Palo Alto
By Sherry Listgarten | 5 comments | 6,675 views

Three new restaurants from former Manresa chef David Kinch and his team are coming to Los Gatos
By The Peninsula Foodist | 1 comment | 4,008 views