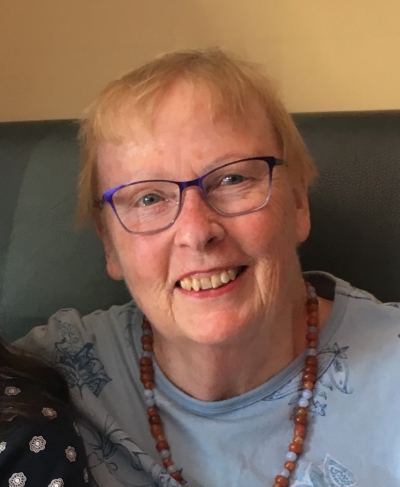 Long time Palo Alto resident Anne Christman, artist, mother and gardener, passed away peacefully at her home after a brief illness on May 9, 2020. She was 87 years of age.

She was born and raised in Missoula, Montana until she moved with her mother to Palo Alto at the age of 10. She attended Palo Alto Senior High School and graduated with honors from Stanford University in 1954 with a B.A. in Art.

She went on to attend Cranbrook Academy of Art in Michigan from 1954-55, where she met Jan Langdon who would become a colleague and lifetime friend. Their shared love for weaving lead them to the Haystack Mountain School of Crafts for a summer and then to New York where she worked in the fabrics industry, taught high school and college classes in art, and received an M.A. in Art from the Teachers College of Columbia in 1960. She also discovered the Greenwich Workshop and began her career in ceramics.

Moving back to the West coast, she co-founded The Weavers studio in Berkeley, California and from 1960 to 1967 she entered her work in exhibitions and had a number of her pieces purchased by museums. It was also an exciting time for the ceramics studio at Cal, where she met many of the artists gathered around Peter Voulkos.

During this time she also met Gene Christman, a scientific illustrator with the Museum of Vertebrate Zoology at Cal, whom she would marry in 1965. Their son Brian was born the following year.

Anne continued to have her woven rugs and tapestries exhibited in gallery shows and had her work reproduced in several publications, but by the early '70s she turned her focus to her family.

Moving back to Palo Alto in 1976, she began working at the newly opened branch of The Nature Company at the Stanford Shopping Center, where she would eventually become store manager. During this time she also earned an M.S. degree in Art Management from San Jose State University. She continued working in retail until she retired in the late 1990's.

While art was her chosen form of expression, her true heart lay in the love of nature and being in the natural world. Trips to visit family in the northwest where always a highlight of her year, especially being able to take solitary hikes in the woods before returning to the cabin to enjoy a huckleberry dessert.

Always eager to explore, she travelled extensively in the U.S. and abroad, preferring trips focused on walking tours, art history, or pottery. These included a tour of French impressionist museums in France, a walking/sketching tour of the Barren in Ireland, a pottery tour of Devon/Cornwall area of England, and other trips to Spain, New Zealand, Costa Rica, and Africa.

When at home, her favorite place was in her garden, and she could always be found watering, mulching, or weeding the beautiful blending of flowers, herbs, and vegetables she cultivated.

Anne was a loving mother, loyal and dear friend, and a major figure in her family. Her patience, creativity, zest for life, and joyful sense of humor brightened the days of all who knew her. She was predeceased by her brother Bill, and ex-husband Gene. She is survived by her son Brian, daughter-in-law Katie, and two grandchildren.

Photo Gallery
0 photos Upload a photo
Remembrances
1 entry Submit a remembrance
From June (Christensen) Casey
Aug. 2, 2020
Anne and I are both members of the Palo Alto High School, Class of 1950. I remember her as a tall, reddish/blondish gal in school. I just read her life story and am amazed at all of the things and adventures she had. I send my deepest sympathy to ...
Read more
Memorial service
The family will be having a private online service.
Make a donation
Donations to an environmental organization of the donor's choice are encouraged.
About this site     Contact us