A scientist and researcher from a young age, da Rosa nurtured his sharp mind and incredible capacity for knowledge with home chemistry sets, a self-constructed dark room and an uncanny ability to absorb and retain scholarly lessons without ever taking notes. After graduating from the Brazilian Military Academy and the Brazilian Aeronautical School, da Rosa attended Harvard University and Stanford University, from which he received a Ph.D. in electrical engineering.

Upon returning to Brazil, da Rosa founded and was the first head of both the Diretoria de Rotas Aéreas (the Brazilian FAA) and the Instituto Nacional de Pesquisas Espaciais (the Brazilian NASA) and a professor of electronics at ITA, an engineering college in Sãn José dos Campos.

An avid flyer, da Rosa was temporarily sidelined by a serious injury during an international glider competition in France, but his passion for aeronautics remained steadfast; he later became a helicopter test pilot before retiring from the Brazilian Air Force in 1965.

Back in California, da Rosa returned to his alma mater Stanford to teach electrical engineering; he was honored as a professor emeritus and kept teaching well into his 90s, garnering legions of fans from his many students.

As a masters swimmer (he was inducted into the International Masters Swimming Hall of Fame in 2004), da Rosa broke 99 National Records and 37 world records. He currently still holds the world records in the 85-89 age group in the 200-meter IM and 200-meter breaststroke.

His family will always remember 'Vovô' as a brilliant mind, a captivating storyteller and a kind human being who loved Mozart, science fiction novels and bestowing his extensive knowledge on everything from 1st-century Roman emperors to current politics in his native Brazil.

A life heaped high with incredible accomplishments, da Rosa's most important role was that of husband and father. He met Aili Ranta in 1944 at Stanford; they were married on Aug. 11 of that year. Seventy years after their wedding day, da Rosa still held his wife's hand and told her he loved her every moment that he could.

Da Rosa is survived by three children: Aino Vieira da Rosa, Nancy Riley and Eric Vieira da Rosa, who from their father inherited a quick wit, an empathy for others and an incredible love of learning.

And Da Rosa's three great-grandchildren, Addison Nahas, Avery Nahas and Sebastian Hawawini (da Rosa's third great-granddaughter is due in September) have the honor of continuing the legacy of a brilliant man who inspired the lives of everyone he met. 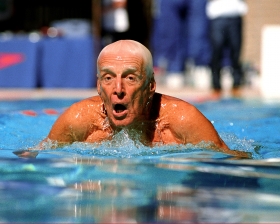 Remembrances
5 entries Submit a remembrance
From Roger Pickler
July 7, 2015
A man that live life to its fullest and had the ability to get you to do likewise. There is no way that this man can be missed because there is way too much to be remembered.
About this site     Contact us