Oh what a wonderful, wonderful human being. Lew saved my life on so many occasions. And he loved my cat Bob - even when Bob nearly took off Lew's nose. We had lost contact over the past few years but his art hangs on my walls and his memory lives in my heart.

I met Luigi at my friend David's home. Lew will be missed because of his warm and generous spirit. He touched the souls of so many with a positive light. One can see this in his work. Lew came out to California where us crazy liberals thrive and he opened his studio to the public sharing his beautiful songs in exquisite color. Chuckles. He said once, "you either have it or you don't." And it's true: not every painter is an artist. I love your songs Lew.

I'd give Andrew Van Way a pulitzer for writing, remembering and honoring his teacher, Lew Silvers. Thank you for taking us down memory lane with Lew and all that he gave to this community and our children. I'm so glad he saw this in 2017! Thank you Andrew!

A true friend, an inspiration and a caring soul. 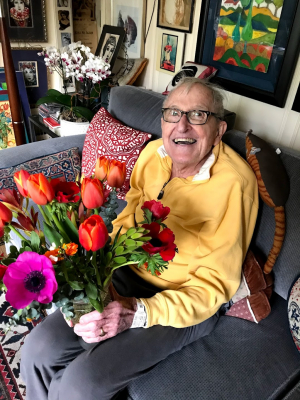