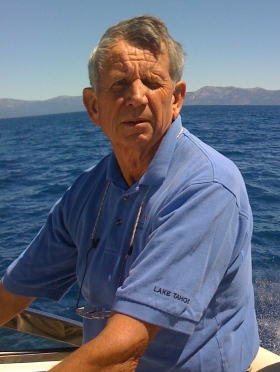 Wayne D. Trewhitt passed away at his home in Woodside, Calif., on Saturday, May 5, 2012. He was born on June 5, 1935 in San Francisco, and was raised in Berkeley, where he attended high school and competed on the swim team.

After graduating from Berkeley High School, he went on to earn a Bachelor of Science degree in Civil Engineering from the University of Nevada, Reno, where he was also a member of the Sigma Nu fraternity.

On November 17, 1963, he married Joan Sterling. They were partners in every aspect of their lives. Wayne and Joan were rarely apart in the 50 years they were together.

Wayne began his career working for his father Wayne Douglas Trewhitt II and the family?s Easley & Brassy Corporation as Vice President 1963-1978 then as President from 1978-1986. Early in his career, as general manager of Solid Waste Engineering and Transfer Systems, the company that owned and operated the San Francisco transfer station, Wayne was responsible for the design of the entire San Francisco-Mountain View transfer system, which introduced the ?tipper? unloading system and aluminum transfer trailers to the waste industry in the 70s. Wayne was inducted to the Environmental Industry Associations Hall of Fame in 1994.

Wayne was a visionary and a leader in the waste management industry. As president and CEO of Nortech Waste, he designed, constructed and operated a 2,200 ton per day Material Recovery Facility (MRF) in Roseville, CA. Under his management over the last 17 years, this facility has proven to be the most successful of its kind in the United States with a total recovery of approximately 40%. The company is owned by Wastech Inc. of Woodside, CA., Sexton Resources LLC of Hillside, Ill., and Recology of San Francisco, CA.

Recently, he had been a guest lecturer on several occasions for the University of Nevada, Reno College of Engineering.

Wayne will be remembered as a devoted and loving husband, father and grandfather and a warm and generous friend as well as a respected, successful and influential professional who was an icon in the waste management industry. He lived life to the fullest, and some of his favorite times were his morning meetings with friends at the Woodside Bakery, boating on the San Francisco Bay and on Lake Tahoe, traveling to Europe with great friends, and spending time with his grandsons in Tahoe.

In lieu of flowers, contributions may be made payable to UNR Foundation, Wayne D. Trewhitt Scholarship ? College of Engineering and sent to Melanie Perish, Mail Stop 162, Reno, NV 89557. Thank you.

I will never forget the first time I seen Mr. Trewhitt. I was an 18 year old kid in the beginning of 1996. He walked across the catwalk between the finished product and sorting department at Nortech Waste. I now know what it would have been like to have seen Frank Sinatra or Elvis Presley. The words used at that moment by my coworkers to describe Mr. Trewhitt would be the foundation for my ambitious journey. To see and have discussions throughout the years with Mr. Trewhitt is something I will never forget and often replay in my mind. In life some of us aspire to inspire before we expire....Very few people will be able to say that this is true for themselves. I constantly, with tireless effort try to build my own business with the vision of being the Trewhitt of my company. In some ways I am for it is my own silly way of labeling the highest ranking member of a organization. He definitely was the Caesar of his profession. I am forever in debt to this great man for the impact he had on me. Thank you sir. I wish I could have said good bye.