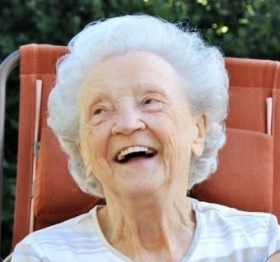 Stella Mary Mead left this earth on December 8, 2021, at the age of 98. She was born in the papermill town of Nekoosa, Wisconsin on March 31, 1923 to Stanley and Mary Wilczynski, the 8th of 11 children. With 6 brothers she learned to be tough, and she was very athletic and daring as a youth, even diving off the city’s bridge over the Wisconsin River when dared by her brothers! She moved to Chicago in 1943 and worked as a “Rosy the Riveter” at Douglas Aircraft there, where she met Gordon Mead and married him in 1949. She had three sons and the family moved to Morton Grove, Illinois in 1959 and she began work at Baxter Labs, helping with product shipments in the warehouse there. This began a long career of helping support engineers in the field for Baxter. After she and Gordon moved to Palo Alto, California in 1980 she went to work for Varian. Arriving at work at 5:30 am every weekday to answer inquiries from the East Coast, she kept this up until she finally retired at the age of 80, the oldest Varian employee when she left the company. It was around this time that Gordon passed away. She then lived with the family of her son Hardwin until it became clear she would need full time care. An angel arrived in the person of Etuina Pahulu, who had been her part time caregiver, and Etuina and her family took Stella in with them and cared for her with great love for the last 2 ½ years of her life until her passing last month.

Stella was known for her sense of humor, quick wit and unfiltered commentary, be it at her grandson’s Little League games, or even during church services! She loved to bake, and for many years would make up to two dozen different types of cookies for Christmas that she would gift to people. Many friends were made at Menlo Park Presbyterian Church, and until COVID struck, she was a mainstay in the front of New Community Church in Menlo Park. All her siblings predeceased her, and she is survived by sons Hardwin in Palo Alto, John in Mundelein, IL and Gordon in Skokie, IL, along with 9 grandchildren and 9 great grandchildren. All are certain that she is making many laugh with her in heaven!