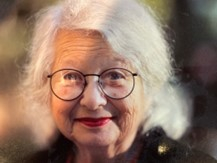 She was born in Boston, Massachusetts on July 19, 1932 to Florence and Samuel Granetz. She earned her Bachelor of Arts degree in Psychology at Boston University, working her own way through college despite being told that college education is for men. She remembered fondly meeting Dr. Martin Luther King, Jr. in her capacity as the Psychology Club President. She earned her PhD. in Sociology and Psychology while attending the University of Chicago. She wrote a Master’s Thesis on the Generational Patterns of Female Elvis Presley Fans. During this time she met and married her husband, Bill Lyell. Later, the young couple and infant daughter moved to Columbus, Ohio, where Bill taught Chinese Literature at Ohio State University. They expanded their family to a total of four children, and moved to Palo Alto in 1972. Ruth taught college-level psychology and sociology courses for over 20 years at many local colleges and eventually became a full professor at San Jose State University. She specialized in the psychology of aging, authoring Middle Age, Old Age: Short Stories, Poems, Plays, and Essays on Aging. Ruth is best remembered as an intellectually curious thinker, fierce advocate for the state of Israel, and avid reader. She often enjoyed walks in the Baylands, and was a member of several local walking clubs. In later life she enjoyed lecturing on diabetes and its management and volunteered at local health fairs. She is survived by her four accomplished offspring, Miriam Lyell, Sean Lyell, Deirdre Lyell, and David Lyell. She is remembered and loved by her many grandchildren, who fondly recall her red dresses and tennis shoes.