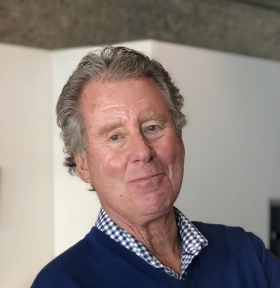 If the true measure of a life well lived is achieving heartfelt happiness, then Ronald P. Reis, known to all as Ron, was a master of living well. The longtime Menlo Park resident welcomed all with smiles of enthusiasm and often a joke or two. He was friends with many, most of whom shared his passion for family life, golf, tennis, card games, magic tricks and a good laugh.

On Saturday, Oct. 31, Ron’s joyous life came to an end as he lost his long battle with lymphoma at UCSF Medical Center. His loving wife Barbara and their family were at his bedside. The music of Carole King and James Taylor, his favorites, was playing softly.

Ron Reis was a native San Franciscan who was raised on the Peninsula. His parents were Bob and Kato Mendelssohn Reis. Kato was a classical pianist and music teacher who taught piano to Ron and his brothers. Bob Reis was the founder of DataSafe, a South San Francisco-based records management company where Ron served as executive vice president during his second professional career. Ron and his brother, Tom Reis, co-owned and managed the company.

Ron graduated from Woodside High School, where he was senior class president in 1964, and received both an undergraduate and a master's degree from the University of Redlands, where he played varsity tennis. Ron then pursued a Ph.D. in speech pathology and audiology from Kent State University in Ohio. He was a teaching assistant there during the infamous National Guard shootings of students on May 4, 1970.

After receiving his degree in 1973, Dr. Reis chaired the speech and audiology departments at a physical rehabilitation hospital in northeast Ohio where he met his future wife, Barbara. They were married on May 10, 1975, and soon after their marriage they relocated to Denver, Colorado, where Ron joined the faculty of the University of Denver as an assistant professor of speech and audiology.

While in Denver, the couple welcomed their first two children, Klari and Peter. Six years later the family moved to Bakersfield where Ron directed Mercy Center, a multipurpose community wellness center that was part of the Mercy Hospital system. The lure of the Bay Area drew the family back to the Peninsula a few years later when Ron joined DataSafe, the family business. The following year, 1987, Michael Reis, the family’s third child, was born.

Ron retired from DataSafe in 2010. The years following retirement were filled with world travels and the joys of seeing their three children succeed in their chosen careers and be happily married. Daughter Klari is a San Francisco-based artist with an international reputation. She and husband Michael Isard have two beautiful children, Otto and Phoebe, who lovingly called their grandfather, Ronpa. Son Peter is also a professional artist whose works sell worldwide. He and wife Kay Panchal reside in Richmond. Michael Reis is married to Olivia Maki, and they are the owners of the Redfield Cider Bar and Bottle Shop in Rockridge in Oakland. Ron was fond of saying that it doesn’t get any better than seeing your kids married to wonderful people and loving what they do.

Ron and Barbara enjoyed an active social life and traveled whenever they could, most recently to Egypt, Jordan and Israel. They were frequent concert and theatergoers who appreciated an eclectic mix of the arts. The couple shared a love of fine art, particularly modern and contemporary works. They were frequently seen at the Anderson Collection and the Cantor Arts Center at Stanford, where Barbara is a docent. Ron was also an active member of the local Sons In Retirement (SIRs) professional men’s organization.

In addition to his beloved wife, children, and grandchildren, Ron is survived by his three brothers, Tom (Julie) Reis of San Francisco, Brian (Prudence) Reis of Foster City, and John (Karen) Reis of Menlo Park, as well as their families and many cherished friends.

Persons wishing to donate in Ron’s name should consider the Leukemia & Lymphoma Society, or LifeMoves, an organization dedicated to breaking the cycle of homelessness in local communities. Ron served as a former board member of LifeMoves, sharing his signature optimism and hope.

A celebration of Ron’s life will be arranged post-Covid. Not surprisingly, he requested his memorial to be an ice cream social.

This is Neal Goldman from Boston. I have known him thru the industry for 40 years . What a wonderful person and friend, thru the years. My sincerest. Sympathies to his whole family.

I attended The Univ. of Redlands with Ron during the 1960's. Became friends during a semester abroad at the Salzburg, Austria campus.Ron was very well liked by all of us in the program. We all had fun living in a great European city, being exposed to a different culture and really getting to know the other students well. A few years ago we held our 50th reunion in Sonoma and I visited with Ron for the first time in all those years. He was still the same warm, congenial guy. I want to offer my sympathy to his wife and family. God bless you all.

My parents, sister and I remembered this guy fondly. He owned my old house 901 Siskiyou Drive before I lived in it. He also owned my other old house 7 Lassen Court. I’m sorry and deeply saddened to hear about this awful loss of such a wonderful remarkable gentleman who had such a kind and compassionate heart. The best Christmas gifts I got from him and his wife Barbara were Hello Kitty gadgets.