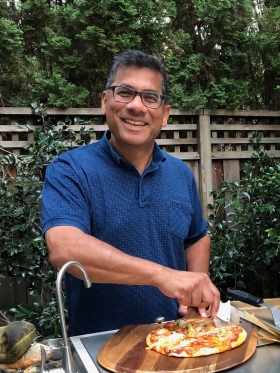 Raj Marphatia passed away from cancer in his home in Palo Alto, California on May 8, 2020. He was at peace with his illness and reached the end of his life lovingly surrounded by his daughters, Maya and Leena, and his partner, Carolyn. Family and friends around the world were present in spirit.

The beloved son of Chandrakala and Ravi Marphatia, Raj grew up in Bombay, India. At 17, he came to the United States on a Rotary scholarship. Raj landed as an exchange student in Iowa, where he fell in love with cheeseburgers, baseball, and all things American. He remained in the US, attended Harvard University on a full scholarship, and went on to earn a Masters in Accounting from Northeastern University and a JD from Harvard Law School. Raj became the first non-white president of the Harvard Law Review in 1987. In his 30 year career with the law firm Ropes & Gray, he earned widespread professional respect for his sage advice, attentive mentorship, and unfailing determination. Fiercely committed to his work, Raj helped to build the firm’s private funds practice into a national powerhouse. Though Raj was eternally humble about his accomplishments, they were numerous and outstanding - the results of an unparalleled work ethic and love for learning.

In his time at Harvard, Raj met Nalini Ambady, who went on to become his wife, a Stanford University professor, and a renowned expert in social psychology. Nalini was Raj’s equal (or in his words, superior) in her wit, scholarship, and adoration for her work. The pair had two daughters, upon whom Raj doted, never missing a soccer game or dance recital. Raising daughters as playful, brilliant, and compassionate as their parents, yet entirely unique in their passions, was one of the great joys of his life. The family’s love for each other has lasted through and beyond Nalini’s passing from leukemia in 2013. Years after Nalini’s death, Raj (a true romantic at heart) found the second love of his life in Carolyn Hayes. Their partnership was full of laughter, music, and mutual kindness.

Raj was a thoughtful and steadfast friend, devoted family member, and simply exceptional human being. Raj will be missed by his mother, Chandrakala Marphatia; daughters, Maya and Leena Ambady; father-in-law, Shanker Ambady; sister, Mona and her husband, Asit Khandwala; nieces, Anoushka and Nikita Khandwala; partner, Carolyn Hayes; and a warm global community of family, friends, and colleagues. Donations can be made at rajmarphatia.com to support the education initiatives of The Rotary Club of Bombay North.

I am so sorry to learn of your loss of Raj. I knew him in law school, where he showed a gently understated sharp intellect, and at the same time was utterly generous and kind. One just wanted to bask in his positive outlook. He brought that open warmth to his leadership role as President of the Law Review. One of my favorite memories of being with Raj is that, in my role as chair of the journal's Centennial in the Spring of 1987, we commissioned a fantastic huge cake in the shape of the building that housed the Law Review, named Gannett House. We were delighted that the cake maker had carefully included tiny details, like the phone by the front door and the bicycle rack in front. (I have uploaded a photo of Raj and me with the cake.) Later we served the cake at the Centennial banquet. I regret that after law school I did not have contact with Raj for too many years. Then in late 2013 I saw the obituary of his wife in the NY Times. I was so sorry for this loss. My mother had died suddenly at age 48 (when I was 14 and my sister was 6). My mother was also a psychologist. I wrote to Raj in November 2013 to send him my condolences, and to say that, even though she was gone, I knew that my mother's gifts and her love were still with me, and I hoped that Raj and his children would share this kind of solace. Raj replied so kindly. We hoped to see each other in person soon. Now may I offer the same thought -- that Raj's gifts and love will live on in his family and friends. With my deepest sympathies and best wishes, Jonathan (Jonathan B. Wiener, HLS '87)
From paul newton
May 28, 2020

I have wonderful memories of Raj from Harvard. He was such a sweet and caring guy and always always seemed to have other people's backs, always willing to help cram for an exam, always the first in line to help others. I haven't seen him in 40 years, and it is funny what sticks in your mind about people. I didn't know of his accomplishments after college as we lost touch, but I will always remember his smile and his attitude towards life and his compassion towards others. His family is very lucky to have known this special special man.

I went to grad school with Raj at Northeastern and he stayed at my house on Martha's Vineyard after we graduated in 1982. Kind, friendly and compassionate, he was very special and one of the smartest persons I have ever known. I recall studying for the CPA exam (a 20 hour test) with him and another colleague and Raj just knew the content cold with no apparent effort. Amazing intellect. It was a privilege to have known him. My sincerest condolences to his family.

I want to honor my uncle Raj Marphatia who passed away last week far too early (age 60) from cancer. One of the most amazing human beings to grace this planet. Raj inspired me on many levels: - High degree of academic and professional success from working hard and having a high EQ - Exceptional humility and kindness that he showed everyone - Resilience and grace in his wife's passing 7 years ago at age 54 - Setting an amazing example for his daughters to not be victims and inspiring them to live their lives when they lost their Mom - Courage and spirit that he showed as he fought his illness