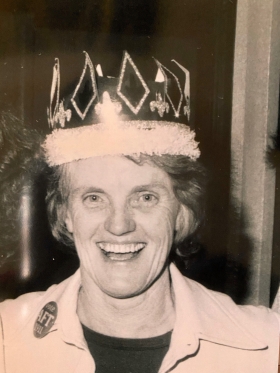 Katherine Phillis Beattie Basile, a pioneering force in education and labor rights and an adoring mother, grandmother and great-grandmother, passed away on April 28. Long time Laguna Beach resident, who also spent significant time over the last 30 years in Menlo Park and Portola Valley (Ladera) with her daughter’s family, she passed away with her son and daughter at her side.

Phillis was born August 6, 1924 to Katherine “Kay” Drusilla, a librarian, and George Taylor (Phillip) Beattie, a road engineer. She was born in Anaconda, Montana, a mountain-and-mining community near the Continental Divide, but raised largely in New Jersey.

Life was not always easy, nor simple. At one point, she attended a country school with no plumbing. One year around Thanksgiving, she participated in a food drive for people in need – only to return home to find that one batch of the cans had been left on her own doorstep. And at 13, she lost her father to tuberculosis.

Upon graduating from Columbia High School in Maplewood, New Jersey, she was determined to attend college. She earned a scholarship to the then-New Jersey College for Women, now known as Douglass Residential College.

Phillis was the president of the student body at the College for Women, then graduated in 1946 with a degree in economics as a member of the Phi Beta Kappa Society. Upon graduation, she moved west, with her mother, to obtain a master’s degree at the University of Washington. There, when she received a fellowship to research employment trends, she discovered her twin professional passions of education and social justice.

Upon graduation, she became the chief negotiator for the California Nurses Association – whose members, not coincidentally, have some of the strongest bargaining contracts in the nation to this day, as well as groundbreaking involvement in patient care decisions. Phillis also held several key positions with the U.S. Department of Labor, including service as Western Regional Representative for its Women’s Bureau.

In 1958, Phillis took a business trip to Los Angeles, where she met Rudolph “Rudy” Basile, an attorney in private practice who would go on to participate in some of California’s first legal aid projects. They were married within three months and soon had two children: Katherine Mary “Katy” Basile; and George Matthew Basile.

Motherhood did little to slow Phillis’s career. She traveled for work with little Katy on her hip. And, famously, in 1961, she ran the first Western Regional Conference on the Status of Women – an organization dedicated to gender equality and the empowerment of women – when she was eight months pregnant, wearing a lavender-colored maternity dress.

In the mid-1960s, Phillis began teaching macro- and microeconomics at Orange Coast College in Costa Mesa. There, she published two study guides and developed an innovative television course in consumer economics – and became a leader in the region’s community colleges.

Phillis served as the president of the Orange Coast College Academic Senate and signed the charter that would associate local educators with the California and American Federations of Teachers – though California did not yet allow for collective bargaining with public employees. When the Rodda Act passed, the local AFT’s efforts to achieve representational status culminated in the faculty handily electing Phillis president of the local AFT chapter.

For years, Phillis fought tirelessly for the rights of educators, for equitable salaries, improved working conditions and educational quality. She was known for her belief in the dignity of the individual and, above all else, for her fearlessness. When the Coast Community College District tried to keep financial information from its employees, Phillis used public records laws to obtain data proving that administrators had misstated revenue reserves. To fight faculty and staff layoffs, Phillis led the union in direct action to prevent faculty and staff layoffs: a coffin labeled “Education” in a Rolls-Royce to illustrate poor priorities in budgeting and a union produced video summarizing the presentations to the Board of Trustees in 1982 – an unflagging effort that “dramatically improved the climate of labor relations,” the California Federation of Teachers wrote while bestowing the Ben Rust Award, one of the numerous recognitions she won for her work.

Phillis was then faced with the opportunity to become the Vice-Chancellor for Human Resources, and after consulting with her fellow educators and union colleagues, Phillis became the District’s vice chancellor for human resources and served in that role until her retirement in 1988. As was noted in the Ben Rust Award about Phillis, “Her belief in the dignity of the individual and the value of the individual’s contributions to the success of the enterprise dramatically improved the climate of labor relations in the Coast Community College District.” (www.cft.org/post/phillis-basile).

In 1988, Phillis found her next calling with the arrival of her first grandchild, Katherine Elaine “Kelly” Fero. Phillis began pouring her energy and intellect into her grandchildren. She helped to raise all six of them and became a role model for them – the embodiment of a life of compassion and independent thinking. (She never let go of her passion for justice and labor rights, however; among other things, in “retirement” she negotiated the first labor contract at Palomar Community College in San Diego County.) She enjoyed watching Rachel Maddow and, most recently, casting her vote for Joe Biden and Kamala Harris.

Phillis was preceded in death by her husband, Rudy, also an independent thinker who made sure individuals had access to justice, her sister Peggy Clemence (John) and brother George (Eleanor (Gray)), and her husband’s siblings Joseph, Matthew, and Stella (and Stella’s husband Dominic L’Abbate). She is survived by her children, Katy and George, and their spouses, Michael Fero and Christina Faris Basile. She also is survived by grandchildren Kelly Fero (married to Joe Acevedo); Allison Leigh Fero (engaged to Kyle Pistor); Shelby Ann Fero; Connor Joseph Basile; Mostyn Scott Fero; and Delaney Rose Basile; a great-granddaughter, Katherine Lola Acevedo; her sisters-in-law Margaret (Marge) Basile (Joseph) (Long Island, New York) and Greta Basile (Matthew) (Washington, Connecticut); and many nieces and nephews.

Years ago I knew my Union sister Phillis. She agreed to apply for membership on the Committee of Credentials, the subcommittee of the Commission on Teacher Credentialing. The COC reviews cases of credential holders in danger of losing their livelihood/credentials. This has to be about 18 or 19 years ago. Phillis's interview was memorable. She spoke with clarity and honesty. At one point she said, when someone asked her how she felt comfortable making decisions, she said, "I know it's not fashionable to say this, but I am a mother, and sometimes mothers have to say, 'this is how it's going to be.'" She was chosen to serve on the committee, and completed one term of that demanding assignment. That evening, a group of us went to dinner to celebrate Phillis's appointment. So many moments during my service in Sacramento involved dispiriting losses and disappointments, so the evening stands out as celebrating a triumphant success. Phillis ordered three scoops of sorbet for dessert, and the restaurant, perceiving our mood of celebration, served the scoops to her on a giant dinner plate, with "Congratulations!!" written on the edge in chocolate. If memory serves, Phillis is the only person from the AFT ever to serve on the COC. I'm sure she did it with the thoroughness and commitment she brought to everything else. I just wish I had had the opportunity to know her better, but what I did know of her makes me mourn her passing, yet celebrate her long, productive and powerful life.