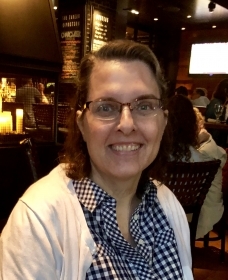 On Sunday, December 2, Laura Kathryn Frey loving sister, daughter, and friend lost her valiant 3+ year battle with cancer at the age of 50. Laura was born on August 21, 1968 along with her identical twin sister Jennifer. Born I n Hanau, Germany, parents are Theodore Drake Frey and Barbara Thornton Frey. Laura, Jennifer and their older sister Leslie lived in Brussels, Belgium for the first four years of her life. The family moved to Lafayette, California in 1972 where she attended Happy Valley Elementary School, Stanley Middle School and graduated from Acalanes High School in 1987.

Both Laura and her twin sister Jennifer Frey attended and graduated from Lewis and Clark College in 1991. Laura’s major was Political Science and her minor was in Philosophy. While earning her undergraduate degree, Laura spent a college quarter in Washington, D.C. studying American Politics. She also spent two quarters in Turkey living with families, learning the language, the culture, and politics of the country.

She received three master’s degrees, one in Political Science from the University of Toronto in 1993 and two others from University of California at Santa Barbara in Methodology and American Politics in 2009, 2010. Laura was a Ph. D. candidate, advanced her dissertation, and defended it. During her years as a graduate student she appeared on a number of panel discussions, and wrote six unpublished papers focusing on her area of expertise, Presidential Approval and events impacting it. She received an award for her exemplary student paper from PAPOR Conference in 2003. In addition, she worked as a Research Assistant with projects measuring Consumer Sentiment, Campaign finance data and Electoral Studies Data. While living in Santa Barbara, Laura became an avid cook, pie maker, and entertainer. She shared her love of cooking with her university friends and with her neighbors on La Cumbre Circle. With her studies almost complete Laura moved back to the Bay Area. Declining health began to impact her life. Laura was always upbeat and positive. She wanted the best for all of her friends and family members so she would drop all of her work to help them. She cared for her sister Jennifer when she became very ill and she was selfless in her giving. She had a joyous smile that showed how much she loved life.