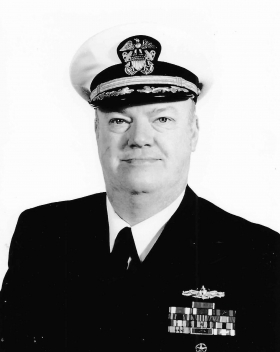 Capt. Keith Montgomery Ott (USN, Ret.), 83, passed away May 24, 2021 in Mountain View, CA after a protracted illness. Born in Los Angeles on December 11, 1937, he was the only child of Raymond Wesley King and Anna Edna Montgomery. He grew up in Kingfisher, Oklahoma. He enlisted in the Navy NROTC program while a junior in high school and was commissioned in 1960 after graduating from the University of Kansas. He served as a sea going officer and shore-based financial manager during his 30 year career. He served on five destroyers, commanding the last two of these ships. He served a tour in Vietnam and served as comptroller at several naval commands including his final five years in the Navy as chief financial officer at the Mare Island Naval Shipyard. He was awarded the Legion of Merit and was honored as the Department of Defense Comptroller of the Year at retirement. He then spent ten years as Director of General Services for Yolo County before retiring in 1989. He was a Master Mason, a Shriner clown, and a Rotarian. His hobbies included genealogy, family history, and reading. After moving to Mountain View in 2015, he cherished the friendships made through his volunteer jobs at the Moffett Field Historical Society Museum, MOAA, and VA Administration. He was preceded in death by his wife of 53 years, Noreen Mitchell Ott. Survivors include his daughter Christine Ott of Washington D.C; daughter and son-in-law Lara and Edward Ruben of Mountain View; and grandsons Matthew and Samuel Ruben. At his request, there will be no services. In lieu of flowers, the family suggests contributions to the American Heart Association.