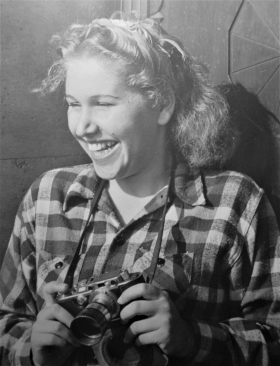 Katherine Sonett Kahrs passed away peacefully on Christmas Eve, 2021, ten days before her 96th birthday. Born in Brooklyn, NY, she was the daughter of Hungarian immigrants Erwin and Helen Sonett. Katherine grew up in California in the desert town of Trona, and in Los Angeles, where she graduated from Hollywood High School. In Los Angeles, Katherine lived in an orphanage for two years while her mother recovered from an illness. It was there that Katherine discovered the joy of drawing and painting which inspired her career.

Katherine enrolled at UC Berkeley and graduated in 1950 with an M.A. in Studio Art and a minor in Art History. In 1949 she married architectural student Charles “Chuck” Kahrs. After college, Katherine and Chuck moved overseas for several years, and started a family. They returned to the Bay Area in 1956 and settled in Palo Alto in 1962. Katherine taught drawing and painting in the Bay Area and won numerous awards for her work throughout her creative life.

In 1973 the family moved to Aptos, CA and Katherine was appointed Lecturer at UC Santa Cruz. A year later Katherine divorced and moved to Menlo Park, CA to restart her artistic career. She changed her focus to dance photography and worked with a variety of dance companies in the Bay Area including, Alonzo King LINES Ballet, Chaksam-pa Tibetan Dance and Opera Company, Harupin-Ha Butoh Dance Company, and the Pacific Dance Center.

In 2003, Katherine relocated to Portland OR to be near her family. Katherine was an enthusiastic adventurer and traveled to China, Turkey, Japan, and many other countries. She loved swimming and felt a deep connection to the ocean. She had a sharp mind, was a voracious reader and enjoyed playing bridge. Dementia diminished her mental acuity in her last years of life, but she never lost her love for art and animals, or her sense of humor. Katherine is predeceased by her parents and her brother Charles P. Sonett. She is survived by her five children, Mark (Diane Litman), Michael, Jeffrey (Sirin Artan Kahrs), Megan (Corey) Deardorff, Jonathan, grandson Noah Kahrs, and sister-in-law, Virginia Sonett.