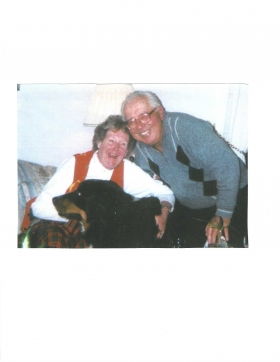 George Fugazi Brown, a long-time resident of Menlo Park, died on March 22rd at the age of 93 after a short illness. One of his close relatives, on learning the news, responded in shock, "I thought he would live to be 100!" Until early this year, he was still driving and went to Palo Alto every evening for Italian food, followed by chocolate dessert on most occasions at Café Pro Bono, where they maintained a personal table for him marked with his name and photo. Brown's ancestors first came to California from the Genoa region of Italy to join the Gold Rush. A few generations later, Brown was born on July 7, 1926 in San Francisco and was raised in Menlo Park with his sister Rosemarie by their grandparents during the Great Depression. Brown served briefly in the US Navy during World War II. An accomplished sportsman, Brown was a professional baseball player for the San Francisco Seals in the Pacific Coast League. He held a black belt in judo and was a low-handicap golfer most of his life. Later in his life he organized golf tournaments for retirees around northern California. He is fondly remembered by his nephews, Mark Lintner of Fallbrook, California and Stephen F. Lintner of Washington, DC, who he affectionately called "Marco Polo" and "Steve-a- Rino." They will miss having dinner with him, and hearing his stories about family history, enjoying his sense of humor an enormous smile. His wife, Mary E. McDevitt-Brown, predeceased him in 2016. Due to the COVID 19 crisis, there will not be a funeral, but a celebration of his life will be held at a later date.

George was such a sweet man - and what a sense of humor! It was so sad to learn of his passing a few months ago, but I only recently discovered this tribute page (beautifully done!) My husband and I actually met George at Cafe Pro Bono, only to find out he lived right around the corner from us. Such a small world. One year when it was exceptionally rainy one night and George was leaving, we mentioned to him that we were neighbors and we'd be more than happy to pick him up and bring him to Cafe Pro Bono with us in the future (after all - we were all going to the same place!) LOL - but George was very much his own man, and never took us up on the offer. I had heard his last couple of months were rough, but he certainly maintained his health and independence for way longer than so many. I hope I'm a fraction of the 'independent' George was if I make it to 93! What a treasure of a man! BTW - George was very much 'family' to everyone at Cafe Pro Bono (staff and other customers like us) - and he's remembered to this day... so much so, a tribute to George and Mary is being included in the restaurant's new web site currently being built. Continued prayers to the family... George will never be forgotten.