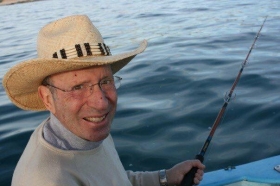 Arthur Martin Mintz left this earth peacefully, surrounded by family and pets, on April 15, 2019, at age 83. Parkinson’s was the only health problem he could not defeat. Born on April 4, 1936 to Raeh and Sidney Mintz, Arthur grew up in Chicago, an only child in a loving extended family of aunts, uncles and cousins. Arthur attended Undergraduate and Law School at Northwestern University. Throughout his mostly charmed life in Chicago and later in Woodside, CA, Arthur wove his law and business careers with his love of adventure, mystery and travel. Open and accepting of all beliefs and life paths, with a big smile and contagious joy for life, he frequently acquired new friends in restaurants, shops and on trips, often developing them into lifelong friendships. He reveled in sharing his amazing life experiences with friends and family and in teaching each of his six children similar appreciations. Arthur was a Renaissance man: a Military Veteran who became a successful Attorney, for over 20 years in Chicago, and later an Attorney and Businessman in CA. Initially Arthur found Lost Heirs, restoring forgotten funds to many. Later he held a seat on The Chicago Mercantile Exchange. Arthur knew and loved opera and poetry, while also being an adventurer, a sportsman, a sailor, a farmer and cattleman, a horseman and even a cowboy! Arthur served his communities in varied roles, ranging from the Portola Valley Schools Foundation and The Parent Board at Eagle Hill School, Hardwick, MA. A devoted long time member of the Mounted Patrol of San Mateo County, Arthur proudly served as Captain in 2003. He was an early Board member of the now Horse Park at Woodside and a supporter of NCEFT. More recently, Arthur became a proud member of The Family, especially enjoying events at The Family Farm in Woodside. He valued education for each of his six children and was supportive and incredibly proud of their varied and individual life choices. Rabbi Sydney always thrilled him, especially when he attended her sermons; Arthur was excited about Mark’s early business achievements and loved hearing about his successes in Real Estate; from the beginning, Arthur totally supported Cunda’s choice to become a Bhuddist Monk; Sarah’s work to improve the health and lives of those living in Developing Countries was a source of huge pride; he was especially thrilled that Allison chose to follow both him and his dad into The Law, living to see Allison sworn in after passing the Bar; and finally Arthur adored our sweet Elizabeth, a Home Healthcare Worker. Elizabeth lived with us for two of her dad’s final weeks, sharing her dad’s care with Abby with complete kindness, faith, gentleness and devotion, helping to give him peace and comfort with her love and the use of her essential oils, treatments and foods. Arthur is survived by his loving partner and wife of 43 years, Abby Sanders Mintz and his six children: Sydney (Ellen), Mark, Ajahn Cunda, Sarah (Tito Llantada), Allison and Elizabeth. Also, his “Godson”, Dave Siebs (Sharon), and his sons August and Erik, and his precious grandchildren, Sienna, Elijah, Gabriel, and newborn, Alia Grace Llantada. Additionally, he is survived by his first wife, Ila Lewis, mother of Sydney, Mark and Cunda, and his acquired Sanders siblings, Victoria (Hank), Bob and Dave. He will also be remembered by numerous cousins, their children and by his many friends. Arthur was a True Warrior, successfully battling a number of life threatening illnesses for over 21 years, earning him the nickname “Nine Lives”. He had a will to live like no other, with a fighting spirit that enabled him to defeat every enemy except the last, Parkinson’s. For this reason, Arthur’s family Is hopeful that any gifts which might be given in memory of ARTHUR M. MINTZ, go to the Michael J. Fox Foundation, for Parkinson’s Research where 88% of every dollar goes to finding a cure for this terrible disease.