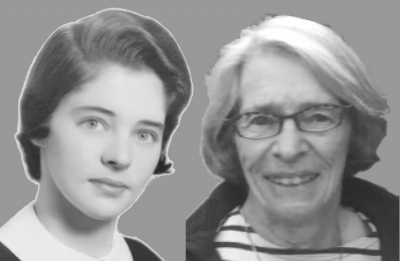 Yvonne Marie Cafasso Lynch, a dedicated educator and lifelong lover of books and learning, died on July 20 after the return of a recurrent illness. She was 85, and lived her final days surrounded by the love of her family.

Yvonne was born in San Francisco, the youngest child of Andrew and Myra Cafasso. Affectionately called “Babe,” Yvonne was raised by a hard-working blue-collar family. She helped her father’s Italian-American family run a corner grocery, tend a huge vegetable garden, and make homemade ravioli. Yvonne’s mother, an orphan from New Zealand who moved to San Francisco with her adoptive parents and later developed polio as a nursing student at San Francisco General Hospital, often struggled to walk but stayed fiercely busy, telling her daughter, “Always work, so that you’ll never be boring.”

Yvonne’s family drove ambulances for SF General, crafted the graceful plaster work on the Palace of Fine Arts, chef'd in the kitchens of the city’s best hotels, repaired MUNI buses, taught in San Francisco public schools, created homemade reds and whites in a basement winery, and supported their fellow San Franciscans as social workers. Yvonne made top grades at San Francisco’s Galileo High School, winning debate championships and earning a spot at the University of California at Berkeley.

Yvonne graduated from Cal in 1958, later earning both a teaching credential and a degree in Library Sciences. At Cal, she also met a young History major named Dave Lynch. The two were married in 1961. With the arrival of the couple’s first child, Yvonne began a life that balanced work and home. The family later moved to the Menlo Park area, where Yvonne would live for the rest of her life. Yvonne taught English in the San Francisco public schools, and later supported students in the Menlo Park public schools with special needs in reading, social studies, and general study skills. She focused on students who seemed quiet or shy, helping them feel welcome. She also worked for many years as an executive office manager at the former Raychem Corporation, and volunteered extensively at the Menlo Park Library.

Outside of work, Yvonne was a lifelong lover of animals, finding companionship with the canine and feline family members that lived with her or her children. She was a devoted walker and hiker, beginning with afternoon treks up to Coit Tower every day after school with her best friends Lillian and Marsha. She later clocked many thousands of miles along the oak-lined streets and foothills of Menlo Park, often with one (or several) of the family dogs at her side. Yvonne was also a gifted baker, whose kitchen turned out mountains of oatmeal cookies and beautiful pies made with the family pastry recipes passed down from her Italian grandmother.

Stylish, orderly, and meticulous, Yvonne loved to read, bike, sew, and dance to ABBA when she thought no one was looking. She always looked forward to returning to her family’s hometown in the Piemonte region of Italy. In a remarkable feat of family research, Yvonne was also able to discover the story of her mother’s birth in New Zealand and find relatives there, bringing new family connections and joy. Even as health challenges arose later in life, Yvonne focused on walking, volunteering, reading, and mahjong. She enjoyed few things more than a shopping trip with her daughters, a train ride to the candy store with her grandchildren, or walking the dogs in the forests of Lake Tahoe. The family home and garden were always open to friends old and new, especially on holidays and sunny summer weekends. Yvonne was a thoughtful, reflective mother, grandmother, and friend.

Yvonne’s legacy includes David, her husband of more than 60 years; her daughters April, Michelle, and Carolyn; sons-in-law Colin, Paul, and Gonzalo; grandchildren Emma, Andrew, Anthony, Alexander, Julia, Ava, and Van; three nieces; cousins in Italy and New Zealand; and countless friends and colleagues. Plans for a memorial befitting Yvonne’s energetic life are underway. Those honoring her legacy may wish to consider a donation to Pets in Need or the Friends of the Menlo Park Library.

Photo Gallery
0 photos Upload a photo
Remembrances
0 entries Submit a remembrance
Make a donation
Memorial donations may be made to Pets in Need or Friends of the Menlo Park Library. https://www.petsinneed.org/ways-to-give https://friendsmpl.org/donate/monetary-contributions/
About this site     Contact us