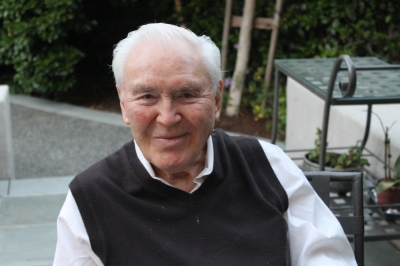 William S. Anderson was born in Hankow, China (now Wuhan) on March 29, 1919. His father was a Scottish engineer who built the first modern ice works in central China. His mother was half Chinese and half Russian. After primary school in Hankow, he went to Shanghai for high school. Just before his matriculation in 1937, Japan declared war on China, invaded Shanghai, then Nanjing and was at the gates of Hankow when all international residents were told to evacuate. He and his mother went to Hong Kong, where he started working as an internal auditor for the Peninsula Hotel. He continued his education, which was cut short by the Japanese invasion, by studying accountancy in the evenings, and after receiving his certification, joined a leading Chartered Accountancy in 1940.

War broke out between Britain and Japan on December 8, 1941, and Anderson fought with the British defence forces until the colony surrendered on Christmas Day, 1941. After two years in a POW camp in Hong Kong, he and other English prisoners were shipped to POW camps in Nagoya and Toyama, Japan, where he worked as a slave laborer in a locomotive manufacturing company.

When the Japanese surrendered to Allied Forces in August 1945, Anderson was repatriated to England, where he joined the National Cash Register Company in London for a brief period of training before being assigned to start up the company's new Hong Kong office.

In 1947, Anderson was a witness at the War Crimes trials in Tokyo for the officers and soldiers at the POW camps. During the trials, he met an American woman, Janice Robb, who was working as a civilian in the Occupation government. After a whirlwind courtship, they married in Tokyo and returned to settle in Hong Kong.

In 1960, Anderson was promoted to Vice-President of NCR for the Far East and Chairman of NCR Japan, and moved with his family to Tokyo, where they lived until 1972. That year, the parent company in Dayton, Ohio was in serious trouble, and Anderson was asked to take over the company as President and later as Chairman of the Board. He had never worked in the United States and was promoted over 30 officers of the parent company. He was the first non-American to head up a Fortune 100 company in the U.S. He transformed an 88 year-old company manufacturing mechanical cash registers and accounting machines into an electronics manufacturer of computers, information processing machines and automated teller machines. Anderson was widely termed "The man who saved NCR". He retired in 1984 and continued as Chairman of the Executive Committee of NCR's Board of Directors until 1989. His autobiography, "Corporate Crisis - NCR and the Computer Revolution" was published in 1991.

During his long career at NCR, Anderson served on the boards of RJR Nabisco, Consolidated Natural Gas Company, Phillips Industries and an early Silicon Valley company, Conner Peripherals. He served on the Special Committee when RJR Nabisco was sold and was written about in the best-selling book "Barbarians at the Gate", which told the story of the largest buyout in American history to date.

William Anderson's many public service and charitable contributions included being the Chairman of the Smithsonian National Board, Chairman of the National Foreign Trade Council, President of the Air Force Museum Foundation, member of the Boards of the University of Dayton, the Asia Foundation, Japan Society, Asian Institute of Management and the Monterey Institute of International Studies. He also served on the Business Council and the U.S./Japan Business Council and the U.S./China Business Council. He received an Honorary Doctor of Humanities degree from the University of Dayton in 1985.

Photo Gallery
0 photos Upload a photo
Remembrances
1 entry Submit a remembrance
From Esther Peralez-Dieckmann
July 28, 2021
On behalf of the Board of Directors and staff of Next Door Solutions to Domestic Violence, we extend our deepest condolences to Bill Anderson's beloved wife Janice and the whole family at this difficult time. He was an intelligent, kind and generous ...
Read more
Memorial service
A private memorial service will be held at a later date.
About this site     Contact us