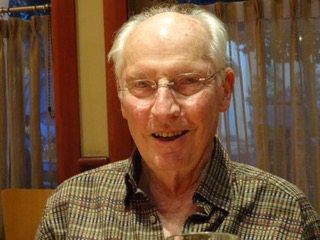 William Brulé Johnson died peacefully at home on May 31, 2020 from complications of multiple system atrophy. He was surrounded by Jane, his wife of 57 years, and by daughters Rebecca Hogenhuis and Melissa Johnson. He is also survived by grandchildren Alexander and Valentina Hogenhuis.

Bill was born on July 21, 1934, in Rawlins, WY. He moved at a young age to Southern California but continued to spend summers in Wyoming with family. After graduating from Harvard University with a degree in Physics in 1956, he returned to California for graduate work in particle physics at UC Berkeley, receiving a PhD in 1963. That same year, he married Jane and joined researchers at Stanford Linear Accelerator Center where he remained for his entire career. His work in high energy physics centered on hadronic spectroscopy with Group B, evolving from bubble chambers to the LASS detector. Along with international collaborators, he authored or co-authored some 75 scientific papers. Bill recognized early on the importance of the computing revolution in analyzing the increasingly large data samples, what we now call “big data.” Eventually, his abiding interest in scientific computing led him to move away from experimental data analysis and into the IT department at SLAC where he led groups on the development of scientific computing until his retirement.

Bill was a loving husband, a patient father and grandfather, a true renaissance man with wide interests in literature and music. He was also an avid tennis player, runner, wine connoisseur and maker, amateur astronomer, backpacker as well as witty punster. A thoughtful, quiet man, Bill didn’t speak much, but what he said was always appreciated and respected. It came from a brilliant, principled, and extraordinarily kind man whose penetrating blue eyes welcomed and reassured. He provided an outstanding example of a life well lived and will continue to inspire all of us who knew and loved him.

“If you walk, just walk. If you sit, just sit. But whatever you do, don’t wobble.”