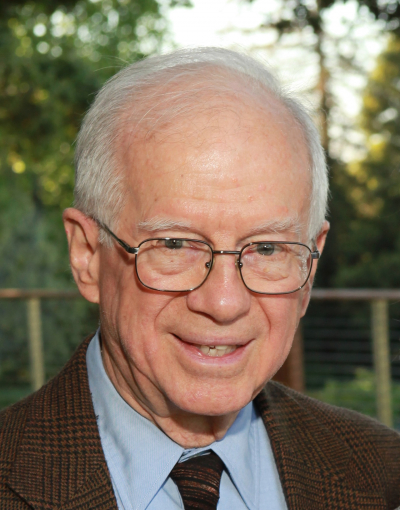 William “Bill” Herbert Orttung passed away on January 5, 2023. Bill died of a brain tumor at the age of 88, surrounded by his wife, two sons and one of his daughters-in-law.

He was born in Philadelphia on June 16, 1934. His father, Elmer H. Orttung, was a stock broker and his mother, Rosalind “Rose” (Duiguid) Orttung, was a homemaker. He grew up during WWII and the period of peace and prosperity that followed. He played the violin in high school, often forming a trio with his two younger sisters, Janet and Evelyn “Evie”. With strong encouragement from his father, he played multiple sports growing up. His family and friends often gathered at the Jersey shore during the summer, where he enjoyed swimming and playing chess.

In high school, Bill developed an avid interest in Chemistry, benefitting from the encouragement of an older friend who tutored him in the basics. He earned a full scholarship to MIT to pursue his studies, where he was the top senior in the field of physical chemistry. In 1956, Life magazine featured him in a larger profile of science and engineering education at the university.

Bill earned a PhD from UC Berkeley in 1961. His dissertation examined the hydrogen molecule. As part of his graduate research, he designed an instrument to study hydrogen that subsequent students used in preparing their own dissertations. As he completed his graduate studies at Berkeley, Bill worked as an assistant professor at Stanford from 1960-1963. There he met Judith “Judy” Ann Meyers, a graduate student in the Chemistry Department. They married in 1963 and celebrated their 59th anniversary a few months before Bill’s death.

Bill took a job as assistant professor at UC Riverside in 1963 and spent his entire career there until he retired in 1994. Bill and Judy welcomed sons Robert (1964) and Mark (1966) soon after moving to Riverside and raised them there. From the time that Bill arrived at UCR and through the following decades, the Chemistry Department and the university as a whole experienced rapid growth. At UCR, Bill pursued a productive career studying hydrogen, water, proteins, and hemoglobin, among many other topics. He published widely in scientific journals. Among his students were Norman Chen, who was the first international student to receive a PhD in UCR’s new Chemistry Department in 1970. Norman went on to become a scientific leader in his home country of Taiwan.

Shortly after his retirement, Bill and Judy moved to Menlo Park in 1997 to be closer to son Mark and his wife Andrea Palmer, and their growing family. During these years, Bill continued to pursue his intellectual passion, researching the historical development and interconnections between Physics and Chemistry.

In Menlo Park, Bill was an activist supporting the Democracy for America group. He was particularly passionate about efforts to address climate change, reading numerous books on this topic and discussing what could be done with other members of DFA.

He is survived by his sister (Evie Orttung Stege), his wife, two sons, their wives (Susan Kennedy Orttung and Andrea Palmer), and three grandchildren (Joseph, Nathan and Sarah Orttung). He was preceded in death by his granddaughter Nicole in 2016 and his sister Janet Orttung Morrow in 1993.

Photo Gallery
0 photos Upload a photo
Remembrances
0 entries Submit a remembrance
Memorial service
Bill will be interred at Skylawn Memorial Park in San Mateo, California. A graveside service with immediate family will be held in the coming days.
About this site     Contact us