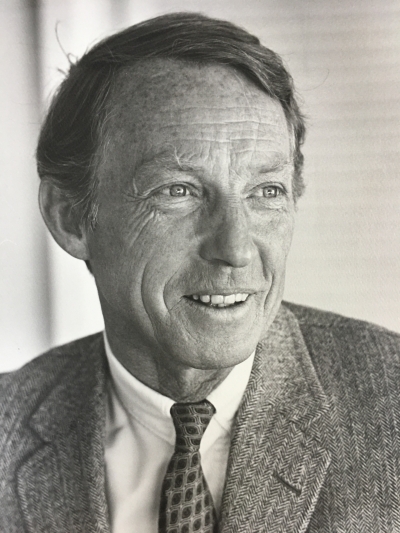 Born on the first day of the Battle of the Somme in World War I, William Guy Garwood lived a long and highly artistic life.

Born in Cle Elum, Washington, William left home at an early age to seek his fortune. Living in Honolulu at the outbreak of World War II, he served in the South Pacific then earned a degree in architecture from Yale University.

His career as an architect included important work with the New York firm of Edward Durrell Stone, which took him to Palo Alto, California, where he was the lead architect on the new Stanford Hospital. It was there he raised a family of four children and entered into private practice.

He was most proud of his design for All Saints Episcopal Church on Hamilton Avenue and Waverley Street in downtown Palo Alto. Built in a cross with a central alter, this neo-brutalist, all-concrete structure features hand-chipped exterior-wall details and a superb display of ceiling-mounted stained glass. He also designed numerous single-family homes and public buildings including the Palo Alto public libraries at Mitchell Park and at Rinconada Park.

An avid and very competitive tennis player, he continued to play until age 95. In his later years he took up watercolor painting, which allowed him to play with light and dark shapes, vibrant colors and captured sweeping views of places he had visited. His life was always busy with projects that let him express his artistic interests, including modeling his architectural designs and building small pieces of furniture.

He will be remembered for his sparkling blue eyes, kind nature, deep artistic talents, ceaseless imagination and energy.

William is survived by his second wife, Raya Garwood, of Sonoma; his children from his first marriage Diana Trygg of Ashland, Oregon; sons Christopher of St. Helena and Mark of Montecito; daughter Andrea Mazar of Beaverton, Oregon and seven grandchildren.