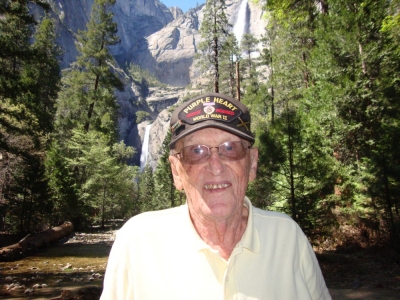 JENSEN, Warren Martin, born in San Francisco, California, passed away on March 4th, 2016, at the age of 92.

Warren enlisted at the beginning of WWII in the Armyâ€™s Field Artillery and participated from the Normandy Invasion to the meeting with the Russians at the Elbe River in Germany, obtaining 5 battle stars and a Purple Heart.

Commissioned from the battlefield, he retired from the Army Reserves in 1963.

A graduate of the School of Business at the University of California at Berkeley, Class of â€™49 and a member of Pi Kappa Phi fraternity, he remained â€œOld Blueâ€ despite obtaining mastersâ€™ degrees at San Francisco State University.

Warren was a retired teacher and Guidance Counselor at Woodside High School and was also a licensed Marriage and Family Counselor.

A Christian by Grace, a Lutheran by conviction, he was a member of University (Berkeley), West Portal (San Francisco), Hope (Colma), Bethany (Menlo Park) and Grace (San Mateo) Lutheran churches, where he served on councils and school boards.

Since moving to Concord in 2000, he and his wife have been members of the Messiah Lutheran Church (Danville).

His wife and best friend of 65 years, Dorothy Jensen died in July 2013. He is survived by his daughter, Kathy and son-in-law, Sheldon Blackman of Maui.

Memorial service
A Memorial Service at Messiah Lutheran Church in Danville, Calif. will be at 2 pm, April 24th. Messiah Lutheran Church 2305 Camino Tassajara Danville, California 94526
Make a donation
Donations can be made to this church or Donations can be made to his church or Hospice of the East Bay 3470 Buskirk Ave. Pleasant Hill, California 94523
About this site     Contact us