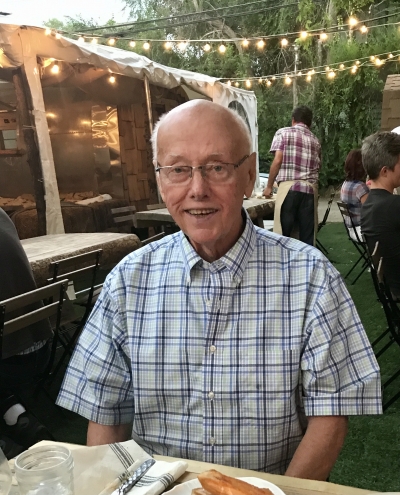 Walter, known to his family as “Pete”, was born in Oakland, California on June 29, 1932 to Walter and Virginia Petersen. He grew up in the orchards of San Jose, California long before it became Silicon Valley. Walt attended San Jose State University and Hastings College of Law before going to Fort Ord and Paris, France during his time in the Army. He returned to the states to start his career at Field-Ernst Envelope. Eventually he co-founded a promotional marketing company - Petersen and Strong/The Petersen Group followed by a consulting role with Wood Associates and Made to Order.

Walt met Marge, his wife of 49 years, at the celebrated L’Omelette restaurant in Palo Alto. They married in Dunsmuir, CA in 1962. Walt and Marge initially lived in Mountain View, CA where their children Kevin and Susie were born in 1964 and 1966 respectively. In 1970 they moved to Palo Alto, CA where they lived until moving to Lafayette, CO in 2003.

During retirement Walt and Marge bought an RV and spent three years sightseeing and visiting family in the Western US. They visited as many national parks, jazz clubs and ballparks as possible. Walt enjoyed working as an usher for MLB spring training in Arizona.

In recent years, while living at Frasier Retirement Community, Walt enjoyed keeping up on current events at local discussion groups, playing golf, harvesting beautiful tomatoes and spending time with friends and family. Those who spent time with Pete know he loved his loyal and trusted companion of 9 years, Winston the Havanese.

Photo Gallery
0 photos Upload a photo
Remembrances
1 entry Submit a remembrance
From Nadine Wachholz
Aug. 2, 2021
Marg and Pete visited Don and me in Wisconsin in their motor home and also when we were in Arizona. We so enjoyed their visits. In Arizona we took them to a restaurant that made a fried Apple burrito which they both fell in love with. I think they...
Read more
About this site     Contact us