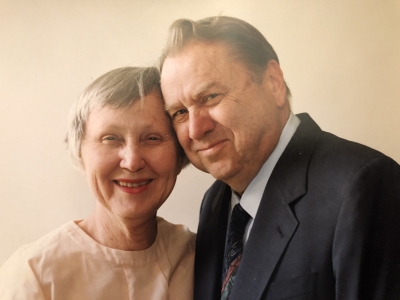 Virginia Mann died peacefully at the age of 94 at Channing House, in Palo Alto, on March 8, 2020. She is survived by her children William, Marilyn (Doug Lesar), Kevin (Christine), Susan and Andrew Mann, and granddaughters Monica Lesar and Sonya and Destiny Mann. She was preceded in death by her husband J. Keith Mann, a professor at Stanford Law School, and brothers Bill and Walter McKinnon.

Virginia was born on May 12, 1925, in Wadesboro, North Carolina. She graduated in 1947 from the Woman’s College of the University of North Carolina with a BA in English. She was editor of the literary magazine Coraddi and worked on the student newspaper. Virginia first met J. Keith Mann while he was in law school and she was doing graduate work in English at Indiana University. Later, they discovered they were both living and working in Washington, DC; they married in Washington in 1950.

Their first child, William, was born in 1952 in Madison, Wisconsin, where Keith was a law professor at the University of Wisconsin. In 1952, Keith moved to Stanford Law School, and over the next 13 years, they welcomed four more children. After their youngest child was in school, Virginia worked as an office manager for the Program in Science, Technology, and Society at Stanford University.

Virginia had a lifelong love of literature and writing. She wrote many short stories and poems, as well as descriptions of her life growing up in Wadesboro. Her granddaughter Sonya created a website where you can read some of Virginia’s writings (http://virginiabywrote.blogspot.com/).

Virginia was known for her gentle manner and generous spirit. She was a keen observer, but seldom criticized or expressed frustration. She enjoyed movies and visiting art museums. Her house was decorated with reproductions of major artists including Picasso and Matisse. When she listened to music, it was mostly classical. She had little interest in technology except for the word processor, which she considered fabulous and almost magical. She was delighted by her grandchildren, endlessly supportive of her family, and a steady friend.