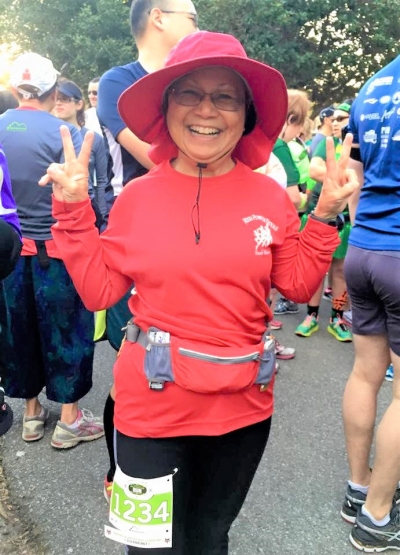 To sum up the type of person Virginia was, consider this example: in the same year, she lost her father, her job, her house, went through a divorce, and... got a second degree blackbelt. What perseverance! Virginia, a technical writer for SAP, was diagnosed with stage 4 lung cancer in January and passed just one month later. Her sudden death was shocking, as she was very physically fit and a non-smoker. She grew up in San Jose and was a graduate of San Jose High School, and she eventually became involved in the SJHS Bulldog Foundation, Alumni Association, and Alumni Band. She graduated from UC Berkeley with a degree in electrical engineering and computer science, and she had attended Lair of the Golden Bear camp for the past 30 years. Bicycling and marathon race walking were two of her passions, and she avidly participated in San Jose Bike Party and SAP Cycling Club. Virginia had been a Taji 100 finisher for the past few years, and when word got out that her health was declining, many people donated their own miles in her name, with a grand total of 1,133 miles! Virginia is survived by her two children, Christopher and Juliana; brother, Silver; sister-in-law, Gina; plus many nieces and nephews. Her ashes will be scattered in Hawaii this summer.