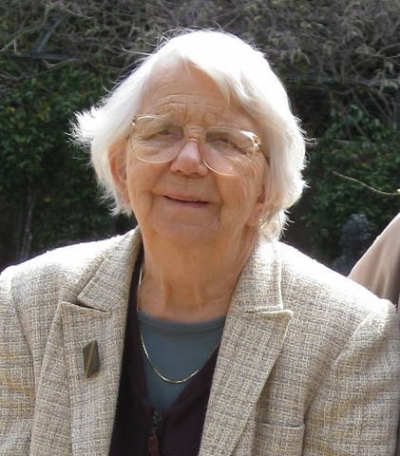 Born in North Dakota, she was raised in rural South Dakota as the oldest of nine siblings. Ginny went to Washington, D.C. as a young woman during World War II to work in a military medical service office. She then earned her R.N. degree from the University of Iowa and was appointed as an Instructor in the School of Nursing.

While in Iowa she met Albert Bandura, and they married in 1952. In 1953 they moved to Stanford, where Albert joined the faculty of Psychology at Stanford University. Ginny continued working for several years as a nurse at the Palo Alto Hospital.

Ginny was a devoted wife and mother as well as a staunch advocate for environmental and social issues. She served as a Board member for the Peninsula Conservation Center for many years and as president of the League of Women Voters of Palo Alto for two terms. She cared deeply about social equality and the preservation of the Bay Area. Through these activities she developed a wide network of friends who knew and loved her.

Ginny was a talented photographer, gardener, cook and avid reader as well as traveler. She especially appreciated the local arts and music scene. She and her family spent countless hours enjoying California's natural beauty and culinary pleasures. Her keen interest in life and gentle sense of humor will be sorely missed. We take comfort in her wonderful legacy and the support and joy she brought to people's lives.

Virginia is survived by her husband Albert of Stanford; her two daughters, Mary Bandura of Olympia, Wash., and Carol Cowley of Boulder, Colo.; and two grandsons.

In lieu of flowers, donations in her memory may be made to the League of Women Voters of Palo Alto or to the Natural Resources Defense Council, New York, N.Y.

Photo Gallery
0 photos Upload a photo
Remembrances
2 entries Submit a remembrance
From Fern Evonne Langmeire
April 30, 2019
Virginia was a beautiful soul that is still missed by many. I wish her family / friends the best.
Make a donation
In lieu of flowers, donations in her memory may be made to the League of Women Voters of Palo Alto or to the Natural Resources Defense Council, New York, N.Y.
About this site     Contact us