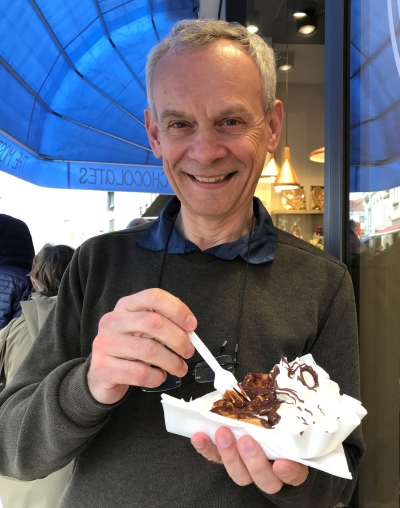 Vincent Lefebvre passed away unexpectedly in mid-May 2020 at Stanford Hospital, surrounded by his wife and children. Born in Normandy in 1957 to Philippe and Rose Lefebvre, Vincent spent his childhood in Normandy and Picardy, France. Vincent’s family enjoyed many road trips across Europe. In addition, there were yearly family vacations at the seaside and the French Alps. As an exchange student during his teenage years, he discovered England and Germany.

Much to the wonderment of his parents, who were then unfamiliar with his new fields of study, Vincent earned degrees in Computer Science and Automation from ESIEA Paris. Upon graduating, he worked for a year in Paris then traveled to the U.S. for a cross-country Greyhound bus adventure, stopping at big cities and national parks. Serendipity ensued: his local host in San Jose, California encouraged him to attend a local job fair. Vincent hastily pulled together an English-language resume and ended up landing a software engineering job. He moved to Silicon Valley in 1982, not yet knowing he would put down roots there.

In the Bay Area, Vincent played violin for the music group at St. Joseph of Cupertino Church. There, he met Mary Beth. They married and had two children, David and Marie. The family eventually settled in Palo Alto, where Vincent continued playing violin for Our Lady of the Rosary Church’s masses, and volunteered with the Society of St. Vincent de Paul in East Palo Alto. More recently, he became involved with the Friends of l’Arche, a non-profit group focused on building a community for people with intellectual disabilities, and was the Treasurer for the local Bay Area chapter.

Vincent enjoyed a long career in Silicon Valley as a software engineer at a variety of companies including Bridge Communications, Nortel Networks, Symbol Technologies, and Motorola Solutions. He later pivoted from software to hardware, becoming the Director of Engineering at Rose Electronics, a high-tech battery manufacturer, where he greatly enjoyed opportunities to do hands-on work and mentor young engineers.

Vincent will be remembered for his calm demeanor and his deep reserves of kindness and patience. He was a skilled woodworker and handyman, a graceful downhill skier, a disciplined runner, and a seasoned traveler. He had recently taken up baking as a hobby, and became known in his social circles for his delicious “gâteau au chocolat” and lemon-almond cakes.

Despite the geographic distance from his family in France, he remained close to them through frequent calls and visits. Vincent was a true family man: a devoted husband, a thoughtful father, and a caring son. In June 2019, he welcomed his first grandchild to the world, his greatest joy of the last year.

Sadly, Vincent’s passing was followed by his father Philippe’s death a few days later. We take comfort in knowing that Vincent and his parents are now together.

Vincent is survived by his wife, Mary Beth; son, David, daughter-in-law, Tonie and grandson, Felix; daughter, Marie and her partner, Brandon; siblings, François, Jeanne-Marie, and Claire and their spouses and families in France and Canada. We, along with his extended Cebedo-Lefebvre family, California pals, and French friends already miss our gentle Vincent.

Photo Gallery
0 photos Upload a photo
Remembrances
0 entries Submit a remembrance
Memorial service
A funeral mass is planned for June 13, 2020, and a celebration of life will be held in person when we are able to gather again.
Make a donation
In lieu of flowers, donations may be made to Vincent’s favorite charitable and community organizations: the Society of St. Vincent de Paul of East Palo Alto; Friends of l’Arche SF Bay Area; St.Thomas Aquinas Parish Palo Alto; and Habitat for Humanity East Bay/Silicon Valley.
About this site     Contact us