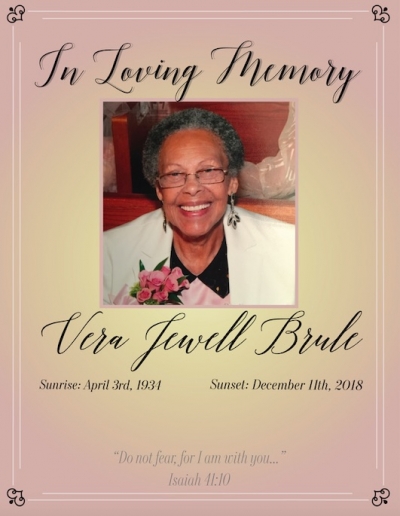 Vera Brule received her education from the San Francisco Unified School District where she attended and graduated with honors from Balboa High School. She also attended The School of Cosmetology of San Francisco where she graduated and became a licensed cosmetologist.

Before retirement age, Vera Brule worked as the Director of the Mendocino Drug Rehabilitation Center in Berkeley, and as a Resident Manager for Clementina Towers in San Francisco.

Vera Brule was baptized at Jubilee Christian Center in San Jose where she rededicated her life to Christ. She then became a member unto death of the Zion Missionary Baptist Church in East Palo Alto, where she was one of the church Mothers.

Vera Brule had many gifts and passions. She once recorded a song "How Much Can One Heart Take" along with her sister, Yvonne Dillion. She was a self-taught pianist and enjoyed entertaining family and friends. She was a prayer warrior and loved to pray for her family and friends. Vera had a passion for Out Reach. She would feed multitudes of people throughout the Bay Area. Always seeking opportunity to provide massive amounts of food and furniture to those in need.