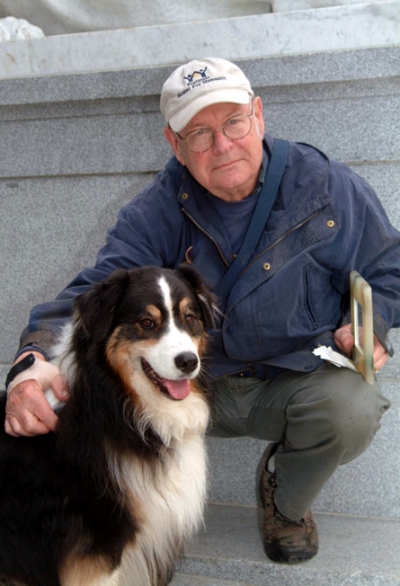 Van Austin Harvey passed away at home on July 11, 2021, at the age of 95. He is survived by his wife Margaret and his two sons Jonathan and Christopher.

The third of four brothers, Van was born to missionary parents in Hankou, China, on April 23rd 1926. His family returned to the United States in 1930, where his father became a Presbyterian minister in Beaumont, California, and later in Merced.

In 1943 Van joined the United States Navy, serving as Ensign on the destroyer USS Benson in the Pacific theater for the last two years of World War Two. Van often spoke of his Navy years as the most formative experience of his life, with these events inspiring both his dedication to intellectual inquiry and an abiding love of the sea.

After the war Van completed his undergraduate education at Occidental College in Los Angeles where he met his future wife, Margaret Lynn. As an avid musician he was involved in campus musical theater as composer, pianist, and singer, while majoring in philosophy. He graduated Phi Beta Kappa in 1948 and married Margaret in 1950.

Van earned a Doctorate in Religion at Yale Divinity School and launched a career as a Professor of Religious Studies, teaching first at Princeton Divinity School, then at Southern Methodist University and the University of Pennsylvania, and rounding out his tenure at Stanford University, where he was twice honored with distinguished teaching awards.

Van was fond of spy novels, histories of the American West, classic Hollywood cinema, the art of fin-de-siecle Europe, and big band jazz. He continued to play jazz piano through the last years of his life. He had a lifelong love of dogs, and enjoyed sailing with friends on regional waters wherever he lived. He found great solace on the open water, as memories and reflections of his life were gathered in the wind that filled his sails.

After retiring in the 1990s he continued to write and publish, and gave popular lectures at The Institute for the Study of Western Civilization in Cupertino, California. His altruism was expressed in ongoing donations to several charities, as well as active volunteer work for Habitat for Humanity.

An extremely popular teacher, Van was immensely proud of his enduring friendships with former students and colleagues. He will be missed by all who knew him well.