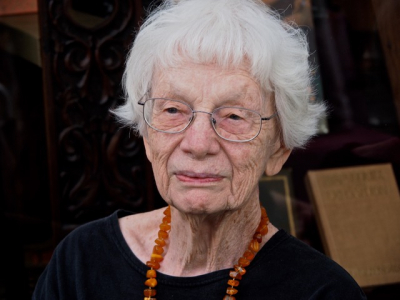 Valeria Dale Bell died peacefully on November 5th, 2022, with family by her side. She was known for many years as the owner of Bell’s Books, the landmark new, used, and rare book store on Emerson Street in Palo Alto.

Val was born in 1927 in the Panama Canal Zone, where her father worked the Pedro Miguel Locks. At the age of sixteen, having skipped two years of school, she was accepted to Stanford University, but her mother, Mary Louise Bryant, kept her home another year, feeling she was too young to go on her own. Val spent that year working in the control tower of the local airport. Since it was wartime, and the Canal Zone was a prime target, there were barrage balloons up all along the coast, and the airport was on high alert. The next year she, her mother, and her sister Lane moved north to California. Her father, Joseph Hutchinson Bryant, followed later upon retirement.

Val recalled that she initially felt out of her depth socially at Stanford as a young girl surrounded by combat-seasoned World War II veterans attending college on the GI Bill. She soon formed close and lifelong friendships with the young women in her classes and her dormitory. She developed a strong interest in labor history, which became a focus of her studies.

She started frequenting Bell’s Bookstore nearby, spending hours in a corner reading. There she met the charismatic and dashing owner, Herbert Mason Bell. They were married in 1948 at All Saints Church in Palo Alto. Over the next six years they had three children together, and in the summers the young bride looked after Herbert’s two daughters from his previous marriage. They lived in an oak woodland in a converted rustic cottage in the hills above Hidden Villa Ranch where watching the deer, bobcats, and hawks brought Val great pleasure throughout her life.

When the children were old enough, Val started working in the family bookstore, and continued there for another half century, initially learning the trade by Herbert’s side, then taking over after his retirement. Through the years all the Bell children played a greater or lesser role at the store. Val, with her kind, calm, and organized nature made it a joy to work with her. Her gentle and unassuming demeanor veiled a quick mind and a sometimes wicked sense of humor.

Valeria’s knowledge of history and literature contributed profoundly to the development of Bell’s Books. She nurtured aspiring writers, and provided established writers with the materials they needed for research. She worked with Nobel, Pulitzer, and Caldecott laureates, world famous symphony conductors, and leaders in Silicon Valley tech industries, many of whom came to have her build them private libraries. She assiduously studied new releases to choose good inventory, and purchased secondhand books by the box and truckload. She also took great pleasure in finding just the right book for each small child who came in. Many Stanford professors sold her their private collections as they retired, and she found appreciative new homes for each of those books.

For the community she generously donated many thousands of books to literacy organizations, local schools, fundraisers, Friends of the Library, and more. She lent her ardent support to peace movement efforts from the Vietnam war era and on. Val quietly paid rent for people on the streets, covered medical bills when people couldn’t afford them, took in friends who were out of a job, and consistently subscribed to local classical musical groups.

Their home was always filled with visitors. She fed them all. Some stayed for days, some stayed years. There was always music playing there, either live from the Steinway Grand and Baroque recorders, or through the giant ancient loudspeakers using the massive vinyl and shellac record collection that was Herbert’s joy.

In 2014, after forty-nine years, Valeria turned the store over to her daughter Faith, and retired to her beloved hillside home. She would sit with a cup of tea, her feet up on the table on the porch, and read in the afternoon sun. At night the owls called back and forth in the oaks.

Her family will always be grateful for the kind people who cared for Val in later days, at home and at Sunrise Palo Alto, and to the Vitas Hospice team.

There will be an informal gathering in Val’s honor at Bell’s Books, 536 Emerson Street, Palo Alto, on Sunday afternoon, January 29th, 2023. Please feel free to drop by to visit with friends and family any time between 2:00 and 5:00. We would love to hear your reminiscences.

Photo Gallery
0 photos Upload a photo
Remembrances
0 entries Submit a remembrance
Memorial service
There will be an informal gathering in Val’s honor at Bell’s Books, 536 Emerson Street, Palo Alto, on Sunday afternoon, January 29th, 2023. Please feel free to drop by to visit with friends and family any time between 2:00 and 5:00. We would love to hear your reminiscences.
About this site     Contact us