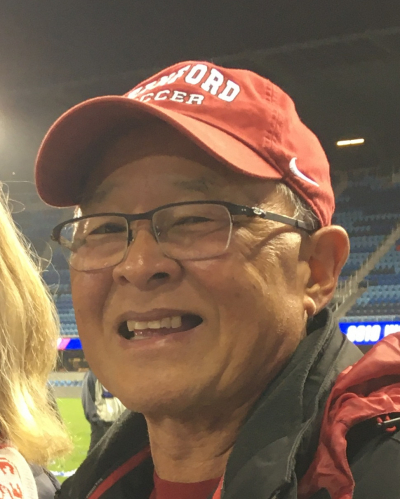 Thompson Sako, known as “Tom” to his friends, passed away December 29, 2022 following a long, courageous battle with Frontotemporal Dementia. He was 70. Born at Stanford Hospital in 1952, his family resided in Mountain View. A graduate of Los Altos High School in 1970, Tom went on to attend Foothill College, followed by completion of his Bachelor's degree in Biology at Humboldt State University. At HSU, he met his future wife Linda along with a close group of friends that would continue to reunite annually at softball and golf tournaments for another 45+ years. Tom and Linda married in Palo Alto in 1977 and lived in Mountain View. During that time, he began as a construction apprentice under Ira Ota in Los Altos Hills. He attained his contractors license and formed his own company specializing in kitchen and bath remodels on the SF peninsula. Tom and Linda continued to run Sako Construction until he retired in 2019. In 1979, they bought their home in Menlo Park, which they remodeled extensively over the years while raising their 2 sons. Through the years, the family enjoyed Hawaiian vacations, educational travel trips, and summers at their family vacation cabin at Pine Mountain Lake. An avid golfer, there Tom hosted an annual gathering of his buddies in the Fall, known as OctoGolf. Tom was not only a volunteer at his sons’ schools, but he coached most of their little league teams. His most notable community service was his 25 years as a House Construction Captain for Rebuilding Together (formerly Christmas in April), an organization that renovates homes for low income families nationwide.

Tom loved so many sports and rarely missed a golf tournament, basketball, soccer, baseball or hockey game when one of his sons was playing. He was also a lifelong fan of the SF Giants, 49ers, San Jose Sharks, and Golden State Warriors, as well as many Stanford teams.

Tom will be remembered for his superior craftsmanship and kind heart. Most of all, we will miss his smile, his laugh, and his calm and cool demeanor. He is survived by his wife Linda of 45 years, son Greg (Jillian) of Redwood City, son Nick of Mountain View, brother Mitchell (Mie) of Santa Clara, nephew Taka, auntie Alice Yamane of Los Altos, and many cousins. Tom is preceded in death by his mother Michi, who passed in 2013, and his father Tom, who recently passed in January 2022.

Photo Gallery
0 photos Upload a photo
Remembrances
0 entries Submit a remembrance
Memorial service
Services will be held at a later date.
Make a donation
In lieu of flowers, donations can be made to Rebuilding Together Peninsula (rebuildingtogetherpeninsula.org), Alliance Home Health and Hospice (alliancehomehealthandhospice.com), the Association for Frontotemporal Degeneration (theaftd.org), or the UCSF Memory & Aging Center (memory.ucsf.edu).
About this site     Contact us