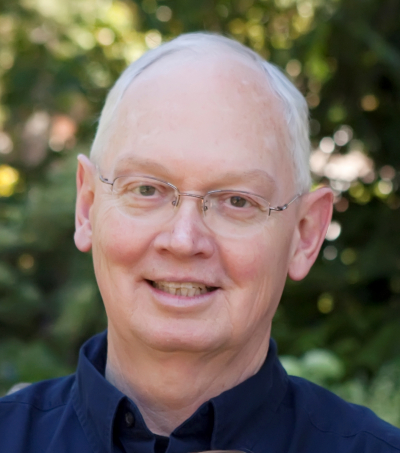 Talmadge “Ted” Cooper, M.D., passed away on February 17th, 2022, from melanoma. With Ted Cooper, the universe really broke the mold. He just did things differently. Before “growth mindset” was a thing, Ted had it in spades. He was a self-taught neuro-ophthalmologist and a self-taught medical informatics expert. He pursued knowledge voraciously and knew a ton about a wide array of subjects. While many in his generation shied away from technology, in 1978 he bought an Apple 2 and was a lifelong early adopter. He could fix anything, was stellar at Trivial Pursuit, loved dogs, and gave the best hugs. To his colleagues, he was a brilliant doctor and a warm mentor. To his friends, he was a trusted confidant. To his family, he was everything.

Ted Cooper was born in Bakersfield, California to Talmage De Witt Cooper Jr. and Mary Cooper (née Lenkersdorfer) on Feb 8, 1943. The son of an Air Force pilot, Ted was a military brat. He moved many times growing up, living in New Mexico, Virginia, Greece, and France and had fond memories of fishing and hunting trips he took with his family all over the world. He attended the American University in Beirut, Lebanon for a year before transferring to George Washington University, where he majored in Latin American Civilizations. He went on to also complete his M.D. (1967) and ophthalmology residency training there (1973). In 1966, he married the love of his life, Sheila Cooper, who he met while doing research at an Eye Bank in Washington, D.C., where Sheila worked at the time.

The tech revolution ushered in another opportunity for Ted as computers became a lifelong passion. He started a computer club with friends and wrote programs that he shared with colleagues at Kaiser. Despite having no formal training in computers, by the late 1980s Kaiser was computerizing their systems and Ted played a lead role in that effort. Over the next 20 years, along with many colleagues, they became pioneers in the emerging field of healthcare IT. Ted was the Associate Director for Medical Information Systems for Kaiser Permanente Northern California and was the National Director of Confidentiality and Security for Kaiser Permanente, where he helped guide Kaiser’s response to HIPAA. He also served as director and chairperson of the Computer-based Patient Record Institute, was an American Medical Informatics Association Fellow, and held leadership positions as part of the Health Information and Management Systems Society. His key accomplishments include bringing the first electronic medical records system and electronic scheduling to Kaiser Permanente and publishing a series of important scientific papers on electronic health technology, privacy, and data security.

After retiring from Kaiser in 2003, Ted formally joined the Stanford Byers Eye Institute. He served as a Stanford clinical faculty member for almost five decades, initially as a volunteer starting in 1973 and then as Clinical Associate Professor since 2010, helping to build the internationally known neuro-ophthalmology team there today. Ted was a dedicated and master educator, spending decades teaching residents, fellows, and faculty and being a constant presence at Grand Rounds. At Stanford, Ted combined his passions for technology and teaching and created a neuro-ophthalmology blog in 2016. For the blog, he reviewed the medical literature and generated educational questions, regularly posting a "neuro-ophthalmology question of the week”. To Ted’s great surprise, the website has become one of the top neuro-ophthalmology learning resources across the world and continues to receive over 10,000 visits a month.

Ted was also an amazing husband, father, and grandfather. He loved his family fully and unconditionally and always believed in and supported them. And because he was so knowledgeable, because he could fix anything, because he had such a steady hand, and because of his unlimited capacity to care about the issues in his family’s life, he was like the ultimate backstop. As his wife Sheila put it, “He has just always been my rock.” He was also the most hand’s on, involved grandfather there ever was who truly delighted in caring for and being with his grandchildren.

If there is one throughline to Ted’s life, it’s that people turned to him to solve problems - often complex and messy ones, involving tricky technical issues and even trickier people issues. And that’s because, as people have commented, he always had a “pragmatic approach to finding solutions” and had a “calm demeanor” and “positive attitude” even in stressful situations; because he was “a hard worker who never complained”, who was “incredibly knowledgeable and incredibly dedicated”; because he was “the best listener in the room and the best prepared”, who was “very thoughtful” and “very sympathetic”; because he was a “calm father-figure you could turn to for anything”; a “total gentleman” who “never had a bad word to say about anyone.”

Despite his accomplishments, Ted was an extremely modest and self-effacing person. In recordings of him talking about his life and career he regularly used words like “luck” and “fluke”. He often said that he had “lived a charmed life”, as if all of this happened by chance. But really so much of what he achieved was a result of him - his strong work ethic and perseverance, his openness to trying new things, his desire to improve healthcare, his fundamental decency, and his steadfast commitment to his family.

He is survived by his wife of 55 years, Sheila Cooper; his son and daughter, Brian Cooper and Marianne Cooper; his son-in-law Scott Saywell; his grandchildren Eóin Cooper, Emmet Cooper, Kate Saywell, and Wesley Saywell; his younger sisters, Mary Ann Jordan and Jo Reser, and his many nieces and nephews. He is predeceased by his parents Talmage and Mary Cooper, as well as by many beloved dogs, including Happy Dog, Cheerio, Tandy, and Boundji.

Ted Cooper was one of a kind and ahead of his time. A remarkable man who was unaware of his own remarkableness. In Ted’s mind what he did with his life and the way he lived it was no biggie. He was just trying to make things work better, get stuff done, and take care of his family. We hope he knows he succeeded spectacularly. He will be dearly missed.

A memorial service has been held. Donations in his honor can be made to the American Indian College Fund.

Photo Gallery
0 photos Upload a photo
Remembrances
0 entries Submit a remembrance
Memorial service
A memorial service has been held.
Make a donation
Donations in his honor can be made to the American Indian College Fund. https://collegefund.org/
About this site     Contact us