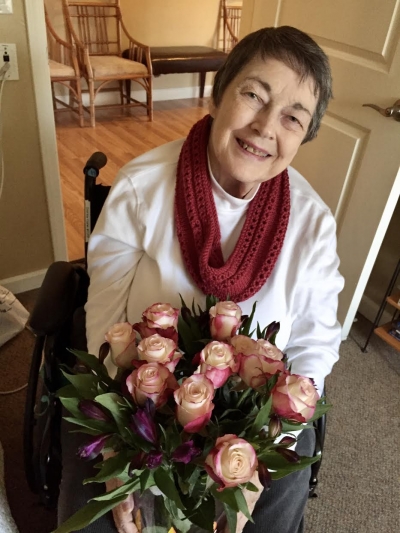 Shirley Ann Cahn was born January 23, 1937 in Albany, California, the daughter of Roland and Miriam Masters. Shirley attended Berkeley High School and graduated from UC Berkeley in 1959 with a BA in Decorative Arts. Following graduation from Cal, she worked for the Emporium Capwell Company in San Francisco, managing the Decorating Studio. There she met Ralph Cahn, whom she married in 1961. They raised two daughters in Palo Alto until their divorce in 1996. Shirley was a loving mother, wonderful artist, staunch supporter of KQED, and cheerful soul who will be greatly missed by all who knew her. She is survived by her daughter Jennifer Cahn (David Fisher) and Julia Elman (Ian), and four grandchildren Natalie and Elena Fisher and Olivia and Anna Elman, her sister, Joan Brinton (Bob), and nieces Mary Beth Santos (Craig) and Anne Ashton (Don). Shirley died of complications from pneumonia and heart failure after many happy years living at Maple House II in Santa Cruz. A private service for the family will be held at Lake Tahoe this summer. In lieu of flowers, contributions may be made to Heifer International, 1 World Avenue, Little Rock, AR 72202, www.heifer.org.

Photo Gallery
0 photos Upload a photo
Remembrances
0 entries Submit a remembrance
Memorial service
A private service for the family will be held at Lake Tahoe this summer.
Make a donation
In lieu of flowers, contributions may be made to Heifer International, 1 World Avenue, Little Rock, AR 72202, www.heifer.org.
About this site     Contact us