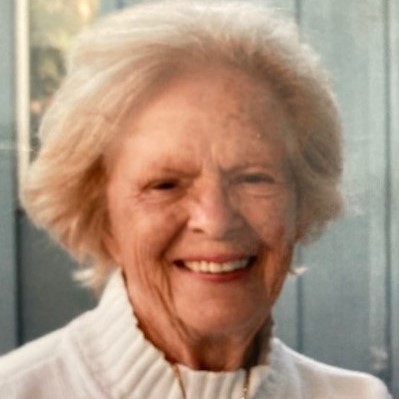 Sally Childs Randall passed away in her sleep on December 2, 2020 at The Sequoias in Portola Valley, California. She was 98 years old.

Sally was born on October 28th, 1922 in Hood River, Oregon, to Hazel Holmes Childs and Leroy Childs. She was the youngest of three children, pre-deceased by her husband, Dick, her parents, her eldest brother Leroy Winston Childs, and her brother Alison Childs. Sally attended Hood River High School, then attended the University of Oregon, graduating in 1945 with a Bachelor of Science degree in Biology. Sally enjoyed being part of the Kappa Kappa Gamma sorority.

In Hood River in November 1948, Sally married Charles Dickey Randall (Dick), who was born in Chicago and resided in Los Altos, California. During their 65 years of marriage, they lived 48 years in Atherton, and enjoyed parties, horseshows, and playing bridge with friends at the Menlo Circus Club. They lived in California, and in Charlottesville, Virginia, and Moorestown, New Jersey. They maintained lifelong friendships based upon those cross-country experiences.

Sally is survived by daughter Susan of Carmel, son Peter (Patti) of Redwood City, and her grandsons Tyler (Danielle) of Sacramento and Greg of San Francisco.

Sally was an active volunteer. She volunteered at the Artisan Shop at The Guild in Menlo Park. Acting on her love of gardening and floral arranging, she was a docent at Filoli. She was also a volunteer for Peninsula Family Services and the Peninsula Volunteers. Donations in Sally’s honor can be made to The Society for Science and The Public (www.societyforscience.org/tribute) and The National Parks Conservation Association (www.npca.org).

Photo Gallery
0 photos Upload a photo
Remembrances
0 entries Submit a remembrance
Make a donation
Donations in Sally’s honor can be made to The Society for Science and The Public (www.societyforscience.org/tribute) and The National Parks Conservation Association (www.npca.org).
About this site     Contact us