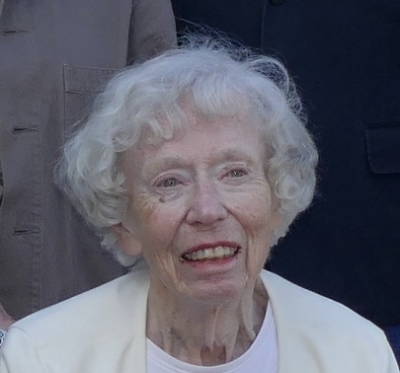 Ruth Hammett was a loving and dedicated wife, mother, grandmother and member of her community. She was as loyal to her family as she was to the charities to which she devoted her time, making a difference in the lives of everyone who knew her.

She passed away peacefully on Friday, September 18 in her Palo Alto home surrounded by family. She was 93 years old.

Ruth was born in 1927 in Hinsdale, Illinois to John and Hilda Finstrom. As a young woman, Ruth worked as both an airplane spotter during World War II and as a candy striper in the hospital, wrapping bandages for sick and injured patients.

A lifelong intellectual, known amongst her family and friends for her quick wit and curiosity, Ruth graduated with a Bachelor’s in Math from Beloit College, and later with a Master’s in biology from Stanford University.

Ruth was also an avid traveler, and she met her husband, Ben, while on a seven-country tour. The pair met aboard the Queen Mary in 1954 and went on to marry in 1957 at the Stanford Memorial Church.

During their lives together, Ruth and Ben were devoted parents, grandparents, and community members, tirelessly volunteering their time to a variety of charitable organizations. In 1968, when the Hammetts and their family lived in Virginia, Ruth successfully championed the local school board to establish an integrated school where children of all backgrounds could learn at their own pace.

When the family relocated to Palo Alto, Ruth continued her charity work, serving on the board of Adolescent Counseling Services, which offered shelter and therapy to young women in need. She was also an active member of the League of Women Voters.

In 2013, Ben and Ruth were given the lifetime achievement award by Palo Alto Avenidas for their ongoing contributions to their local community.

For Ruth, any challenge was easily overcome with a bowl of chocolate ice cream and rainbow sherbet. She loved a good political conversation, wasn’t afraid to speak her mind, and was known amongst family for her impeccable sense of humor. She couldn’t refuse a good book, an afternoon shopping for purses, or a box of See’s Candies. She looked forward to visits from her grandchildren and lived by the creed: “Someday I’m going to get organized.”

Family-only services will be held on Thursday, September 24. To honor Ruth’s life, donations can be made to Adolescent Counseling Services at acs-teens.org.