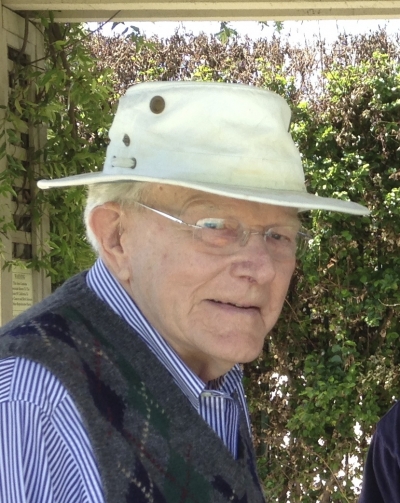 Bob was born in Neenah-Menasha, Wisconsin, and grew up primarily in Flossmoor, Illinois, where in the eigth grade he met his future wife of 56 years, Jean Caldwell. His love of hiking and birding dates back to those years in Illinois and in Ogden Dunes, Indiana, where his family later moved. After majoring in history at the University of Michigan and serving in WWII, Bob attended Harvard Law School, from which he graduated in 1949.

Bob and Jean settled in Palo Alto in 1951 to raise their family. Bob's love of nature was shared by the entire family -- at the beach, in the woods, hiking, birding and camping. The family was especially fond of going to the High Sierra Camps, Carmel, and the San Mateo coast. Bob's interests also included reading, bridge, photography, golf, gardening and international travel. One of his favorite trips was to Antarctica and South Georgia at age 80.

Bob worked in San Francisco at Fireman's Fund Insurance Company for 33 years, retiring as senior vice-president for claims. He managed many high-profile cases over the years, but most enjoyed talking about his experiences insuring the movie industry and its stars.

Among his many interests, conservation and appreciation of the natural environment were of paramount importance. He served on the California Board of Directors of The Nature Conservancy for 19 years and was an active and inspiring docent for over two decades at both Jasper Ridge Biological Preserve at Stanford and Edgewood Park in Redwood City. In addition, he volunteered for the Committee for Green Foothills and the Peninsula Open Space Trust.

In 2005, Bob moved to Vi at Palo Alto, where he continued to apply his professional experience and leadership skills, becoming chair of the Resident Advisory Council, co-chair of the Library Committee, and member of the By-Laws and Speakers Committees.

In all of his endeavors, Bob brought his charismatic good humor and wit. He had an enviable knack for storytelling, which was especially endearing to his family but appreciated by all who knew him.

Bob was predeceased by his wife, Jean, and his son, Richard, of Santa Fe, New Mexico. He is survived by his two daughters, Nancy and Ann, of Oakland.

Photo Gallery
0 photos Upload a photo
Remembrances
0 entries Submit a remembrance
Memorial service
Services will be held on Oct. 24, 2 p.m., at Vi, 620 Sand Hill Road, Palo Alto, CA 94304.
Make a donation
Donations may be made to The Nature Conservancy (www.nature.org/membership-giving/donation/index.htm) or Doctors Without Borders (www.doctorswithoutborders.org).
About this site     Contact us