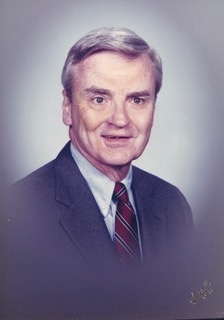 Robert Otis Jack, age 89, died peacefully surrounded by his family (one at a time due to the Coronavirus), on April 22rd, 2020. Bob was born in Arlington, South Dakota on July 21, 1930 to Rollo and Ethel (Cottingham) Jack. In high school he was active in sports, playing on the varsity basketball team, as well as in journalism, where he was the editor of his school newspaper. He was Valedictorian of his high school graduating class and then traveled to Brookings, South Dakota to become a Jackrabbit at South Dakota State University. There he was the sports editor for the South Dakota Collegian and business manager of the State College basketball program. He received the Wall Street Journal Medal for Economics and graduated in June of 1952 with high honor.

In October 1952 he enlisted in the Navy and worked as Disbursing Officer and Supply Officer on ships in the Far East. After being discharged in 1955, he attended the Stanford Graduate School of Business. Upon graduation, he was hired by Lockheed Martin Missiles and Space Company, where he worked for thirty-five years in the Information Processing and Finance departments. After retirement, he did accounting work for various non-profits, including the Friends of the Public Library and the Palo Alto Historical Association.

While posing as a mild mannered accountant, Bob led the life of a superhero as husband and father. In 1961, he married Joan Liddy Jack and with her raised three children: Lisa, Sheila, and Gordy in Palo Alto, California. During a time of political protest and counter culture revolution, Bob bought a VW bus to take his family on numerous camping and cross-country trips. He would drive for days showing the family the beauty of the country while listening to Creedence Clearwater Revival and ignoring the fighting taking place in the back seat.

The red VW bus (and its successor – the light blue VW bus) was the perfect vehicle for Bob, as it allowed him to take his family with him everywhere, be it the picnic grounds of Foothills park, the drive-in movie theater, the beaches of Pajaro Dunes or the weekly trip to the dump. He also used the car to get the family to soccer games, swim meets, and the occasional night out at Stickneys. By the time the kids were old enough to drive, the bus couldn’t go faster than 30 mph, and this, too, was good.

Bob was ahead of his time as a parent in many ways. He was an early adopter parental controls on digital entertainment, much to the chagrin of his children. In the 70s that meant locking the TV plug in a metal box with a padlock on it. He never assigned gender stereotypes to what his children could do, which let them grow up believing they could do anything. He bought them a Radio Shack computer and taught them some simple code, (something they probably should have taken more interest in). He instilled in them a work ethic through weekend chores, and taught them financial independence by letting them manage their own money at a young age.

Bob also really encouraged his kids athletically. Early on, he signed up each of his children to play AYSO soccer and volunteered countless hours as coach, team manager, and cheerleader. In 1973, the family joined the Foothills Tennis and Swimming Club where the children participated in both the tennis and summer swim teams. Bob did his best to instill his love of tennis in his children, but unfortunately it didn’t take. Still, that didn’t stop him from playing almost every weekend with friends and family.

The person Bob was most devoted to was his wife, Joan. No one brought more joy to his life than his wife of 58 years. The two surrounded themselves with friends, from the “mansion” parties in Los Altos, to Stanford football games and tailgate parties, and finally at their retirement home at Channing House. Between the soccer games, swim meets, Adventure Guide meetings, parent-teacher conferences, Bob whisked Joan away on trips to Oregon, Hawaii, Europe, and South America. The two made exploring the world a priority, especially during their retirement years. Joan gave Bob a reason to hang on, even after he became sick and needed full time care in the Skilled Nursing floor at Channing House. His last words to her before he passed was to tell her how pretty she looked in red. Bob is survived by his wife Joan Jack, his children Lisa Jack, Sheila Grau, and Gordon Jack, and grandchildren Charles Smith, Cooper Smith, Rachel Grau, Rickey Grau, Alex Grau, Daniel Grau, and Henry Jack.

There will be a small memorial service at Alta Mesa for immediate family. In place of cards and flowers, the family asks that you make a donation to the Friends of the Palo Alto Public Library.

Photo Gallery
0 photos Upload a photo
Remembrances
2 entries Submit a remembrance
From Amy Greene
April 30, 2020
I met Bob years ago through the Friends of the Palo Alto Board. What a lovely person! We will sorely miss this gentle spirit. Love to his family
Make a donation
https://www.fopal.org/how-to-make-a-cash-donation
About this site     Contact us