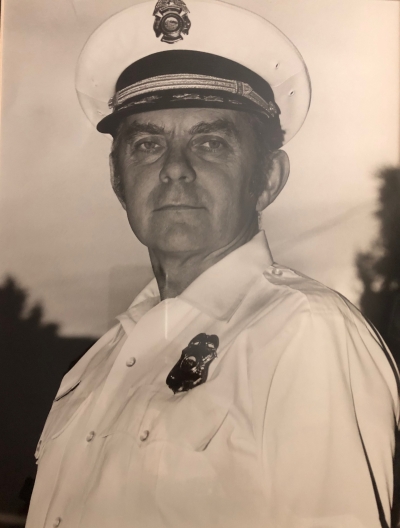 Robert (Bob) Burns, resident and former Fire Chief of Mountain View, California, died peacefully at home with his family on October 11th, 2020. He is survived by his seven children and fourteen grandchildren, his brother Tom and sisters Jean Smith and Joan Culp. Born December 12, 1928 to Bernard and Mynie (nee Huntley) Burns in Colorado Springs, CO, Bob grew up in Berkeley, CA. He graduated from St. Mary's College High School in 1947 and went on to study at Mount Angel Abbey in Oregon through 1949 before enlisting in the Air Force to serve as a Staff Sargent in the Korean War. He was a journeyman carpenter and airplane mechanic, an FAA licensed Aircraft Engine Mechanic and Pilot. He married Mary Morse in 1951 and joined the Contra Costa Fire Department in 1955 before transferring to Mountain View Fire Department as Captain in 1961; he became Fire Chief in 1976 where he developed a Master Plan that became a national model. He taught, lectured and consulted across the country and abroad on master planning, fire loss management and disaster preparedness. Bob's motto was "Love all, Serve all." A dedicated public servant, Bob spent his life serving others through his work, volunteering with numerous organizations including BSA Troop 80, March of Dimes, Amigos de La Raza, Catholic Social Services and others, always ready to lend a helping hand. In 2006, Bob and Mary started the Kasimu Education Fund (KEF) to support the education of students in Manyesa, Malawi, by creating a preschool, constructing school buildings, expanding programs and training teachers. Bob and Mary were married 63 years when she died in 2014. He enjoyed his large family, Dixieland music, a house in Bear Valley he built with Mary, outdoors sports, flying airplanes, and exploring spirituality. Bob, Dad, Grandpa, Brother, and friend, will be deeply missed. In lieu of flowers the family prefers gifts be made to KEF (www.kefmalawi.com) in Bob's honor.

Photo Gallery
0 photos Upload a photo
Remembrances
0 entries Submit a remembrance
Memorial service
Due to Covid, service is tentatively planned for May 22, 2021 at Michael's Restaurant in Mountain View.
Make a donation
Kasimu Education Fund: www.kefmalawi.com
About this site     Contact us