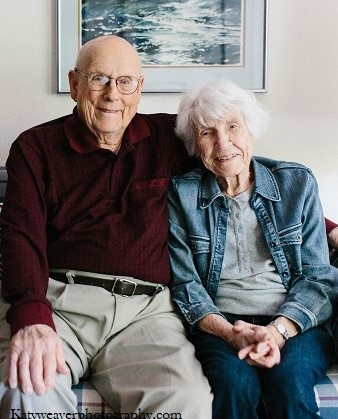 Richard L Stone, a resident of Palo Alto, passed away on July 21, 2021 at Stanford Hospital after a short illness. Born in Cleveland, Ohio, in December 1916 to Lawrence E Stone and Nina Lehman Stone, he grew up enjoying fishing, playing table tennis, and studying insects. He graduated from the University of Michigan in 1938 with a degree in Chemical Engineering and received his Master’s degree there in 1940. While at Michigan, he became a champion table tennis player and also Cleveland City Champion. A few years later, he was ranked 24th in the nation for singles table tennis.

He joined the U.S. Army Air Force in 1940, served stateside at Wright-Patterson AFB as an Aircraft Engineering Procurement Officer, and achieved the rank of Captain at the end of the war. It was in Dayton, Ohio at a USO dance he met Isabelle Stewart, and they married in 1943. After the war, Richard and Isabelle lived in Cleveland while Richard continued with Ph.D. coursework at Case Western Reserve, and began his serious hobby of raising, collecting and hybridizing orchids. In 1953, Richard and Isabelle moved their young family to Palo Alto, and later moved to Los Altos Hills in 1961. Richard was Director of Research and Engineering at the Wallace-Murray Corporation in Belmont, and he worked there until his retirement in 1984. In retirement, Richard and Isabelle spent happy years living in Bodega Harbor and then in Quincy, California, traveling the world to meet with other orchid-growing enthusiasts, birding, fishing, gardening, tending to his prize-winning and multitudinous orchids, and visiting with family, until moving back to Palo Alto in 2010. They spent 73 years together before Isabelle died, aged 94, in April of 2016.

Richard was a patient, quiet, formal and private man. With a dry and saber sharp wit that continued right up to his last days, and an endearing sense of humor, he was the embodiment of an inventor. During his work life, he invented and received a dozen patents for prefabricated metal chimneys, and hybridized many orchids In his later years, he enjoyed photography, watching tennis, and writing articles on orchid growing. Even in his late 90s, he constructed a unique self-contained automated tabletop greenhouse for tree-inhabiting epiphytes which needed special cloud forest growing conditions. He was creative and exceptional during his long life, and he continued working on collecting and analyzing data in order to improve whatever project he was involved with up until a few days before he passed away.

Photo Gallery
0 photos Upload a photo
Remembrances
0 entries Submit a remembrance
Memorial service
No memorial service is planned at this time.
About this site     Contact us