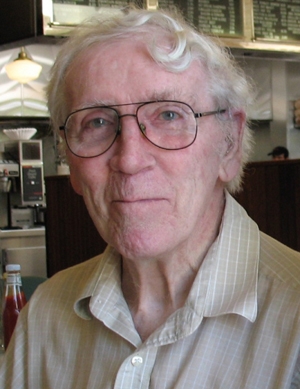 Born in Los Angeles on March 7, 1924, he was the youngest of four brothers born to Albert and Anna Murphy Libby of Massachusetts. The family moved to Boston during the Depression, then returned to northern California in 1936, where Ralph was the president of the Class of 1941 at Vallejo High School. He served in the 3185th Signal Corps Battalion in the Army of the United States from 1943 to 1946; with European Theater service in Antwerp as Message Center Chief.

Ralph earned a degree in History at the University of California, Berkeley, in 1950. He was a librarian at the Washington Post in the 1950s, where the editorial cartoonist Herblock regularly consulted him for researched facts and ideas. He earned a Master's of Library Science at Indiana University in 1959, returning to California and work at Stanford University until 1965, when he became a reference librarian at the City of Palo Alto until final retirement as a part-time librarian in 2002.

Ralph mentored many present librarians with the fine points of reference service, and was eagerly sought by generations of students and teachers for his thorough answers. One of professional contributions is the original Palo Alto Newspaper Index, which is now online.

He enjoyed classical music, literature, mystery novels and films. His passionate interest from childhood was collecting stamps, giving him a firm grounding in world geography that never lagged. Ralph enjoyed cheering the UC teams, wearing his California Bears tie during Big Game week each year. There are several UCB graduates among his family who Ralph supported and advised through university, including his wife Jean, who attended and graduated with two of the couple's three children in the mid-1980s.

Jean Titus and Ralph Libby met when both were employed at the Stanford University Libraries. They married in the fall of 1961, living in Palo Alto since 1964. Ralph Libby is also survived by their son, Thomas Laurence Libby (wife Nalini) in San Francisco; daughter, Clare Loops (husband Gregory) in London; daughter, Beth Libby in Henderson, Nev.; and four grandchildren. His sister-in-law, Madge Libby, and several of his late brother Thomas James Libby's descendants live in the Napa and Sacramento area, and attended Ralph's family burial at the Sacramento Valley National Cemetery on June 21, 2012. At his request, the military honors service did not include the firing of guns.

Ralph Libby's formal associations include the Service Employees International Union (SEIU), the Democratic Party, a life member of the University of California Alumni, and the South Bay Civil War Round Table.

A community memorial gathering will be held Thursday, June 28, at 2 p.m. at the Woman's Club of Palo Alto, 475 Homer Ave., Palo Alto.

Photo Gallery
0 photos Upload a photo
Remembrances
1 entry Submit a remembrance
From Fabia
June 23, 2012
Ralph enriched my life. I feel honored to have crossed his path, and I will be forever grateful for all the kindness and love he always showed me. Ralph and Jean will always be my "American Parents". Thank you. Gracias.
Memorial service
A community memorial gathering will be held Thursday, June 28, at 2 p.m. at the Woman's Club of Palo Alto, 475 Homer Avenue.
Make a donation
Memorial donations may be made to the Palo Alto Historical Association for development of a Ralph Libby Family Collection http://www.pahistory.org/membership.html
About this site     Contact us