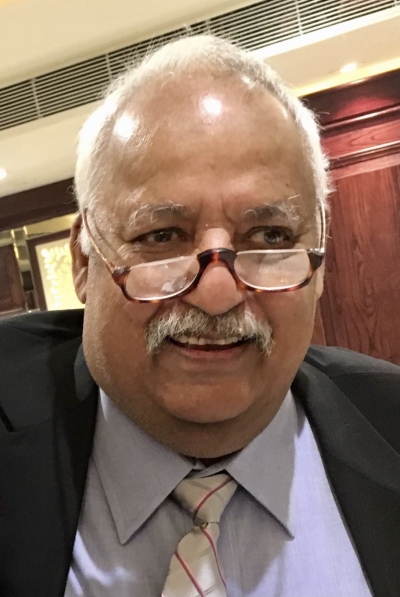 On Tuesday, May 4, 2021, Dr. Pooran Barman, loving husband, father of three, and grandfather of five passed away at age 80.

Dr. Barman was born on November 14, 1940 in the village of Hathras, India to parents Gokul and Tara Barman. His father was the only doctor in their town and set an example of hard work and dedication that Pooran followed. As a child he overcame the accidental loss of sight in one of his eyes and being bitten by a rabid dog. He ended up skipping multiple grades to attend Ganesh Shankar Vidyarthi Memorial Medical College (GSVM) in Kanpur, India at the young age of 18. There he obtained a medical degree and a lifelong distaste for kidney beans (“rajma”) due to a housemate who cooked nothing else.

Eager for learning and new challenges, he moved to the USA in 1967. He arrived in Ohio with only $8 in his pocket and a medical degree. Always happy to forge a new path, before the field of interventional cardiology even existed, he traveled to courses in Switzerland to learn about angioplasty and cardiac interventions. With that training, he was able to come home to St. Vincent’s Hospital in Toledo, Ohio, and over 30 years he helped countless people suffering from heart attacks. He did not mind going to the hospital in middle of the night because that was his opportunity to save a life. He did not forget where he came from, and regularly returned to India with medications and supplies and performed cardiac procedures there for free.

While in Toledo, Pooran met and married Donna McCord, a nurse, on November 14, 1970. They were married for 50 years. During his last few years, she was constantly at his side caring for him. Pooran and Donna raised 3 sons in Toledo. Family was always a priority for him. No golf or parties for him—anytime he was not working he was with his family. He proudly displayed his grandchildren’s’ artwork and wore the scarves they crocheted. He was a huge fan of cricket and would wake up in the middle of the night to watch India play. He was firmly on the Ohio State side of the OSU-Michigan rivalry, and after his son attended UCLA, a big fan of UCLA basketball. In his youth he swam in the Ganges River and was a strong enough swimmer to personally retrieve metal furniture that “fell” in the deep end of the family pool.

After retiring from cardiology, Pooran found his second calling as a grandpa. As his son put it, “he went from being the VIP of cardiology to the VIP of Legos.” He and Donna moved to Menlo Park, California in 2006 with the intention of staying for a few months to help with their first grandchild. They never left. He was known as “Baba” by all of his grandchildren and was the quintessential loving grandpa. His grandchildren could do no wrong and he adored all of them. He was known to slip them candy, spoil them rotten, and love them unconditionally. His granddaughter quickly learned that he paid much more for a tooth than the tooth fairy as he slipped her $20 for each one. Baba lived to spend time with his grandkids. Even towards the end, his one question was “Where are my grandbabies?” and his face lit up when he saw them. In return, they loved him dearly and will miss him.

Baba was always welcoming to all new members of his family, including his new daughters-in-law. He was the sort of man who brought a Christmas present to his favorite strawberry seller at the farmer’s market, who called him “Señor Grande.” He was a patriarchal figure and a loving and generous person at heart. His kindness extended to animals as well as people. Family dogs would routinely gravitate to him at mealtime.

Pooran enjoyed the San Jose rose garden, travel, photography, and the Wall Street Journal. He frequented Kotobuki, a sushi restaurant in Toledo, and always ordered agedashi tofu and kappa maki. He loved spicy food and would eat chili peppers whole but was open to try any food. He would debate politics with others, but always with a smile on his face and warmth in his heart. He was a classy man, favoring well cut suits, and polo shirts.

Dr. Barman was preceded in death by his parents and his brothers Arun and Anoop. He is survived by his wife Donna, his three children, Neil (Linda), Arun (Rini), Jay (Becki), his brother Ajit, and five grandchildren, as well as a large and cherished extended family across the USA, UK, and India. After his passing, countless people from his entire life have reached out to express their grief showing how much he meant to so many. A memorial service will be held on Tuesday, May 11th, 2021 in California. A larger celebration of life and remembrance will be held at a later date. Those who knew him loved him dearly and will miss him greatly but are also grateful that he passed peacefully at home. They thank the healthcare workers at Stanford Medicine who cared for him the last several years of his life. His legacy will live on through his many great works and his loving family.

Photo Gallery
0 photos Upload a photo
Remembrances
0 entries Submit a remembrance
Memorial service
A memorial service will be held at 1:30pm on Tuesday, May 11th, 2021 at Skylawn Funeral Home, Hwy 92 at CA-35, San Mateo.
Make a donation
https://www.unicefusa.org/stories/india-faces-brutal-covid-19-crisis-unicef-there-help/38520?form=FUNVSQSRNWW&ms=cpc_dig_2021_indiacovid3_20210428_google_indiacovid3_delve_None&initialms=cpc_dig_2020_indiacovid3_20210428_google_indiacovid3_delve_None&gclid=Cj0KCQjws-OEBhCkARIsAPhOkIZJC4gAHHkC9hTB6I6WmcZiKskcOjVGzmf5oQaMn-_d1SOMbKeu1awaAkK5EALw_wcB&utm_content=indiacovid3
About this site     Contact us