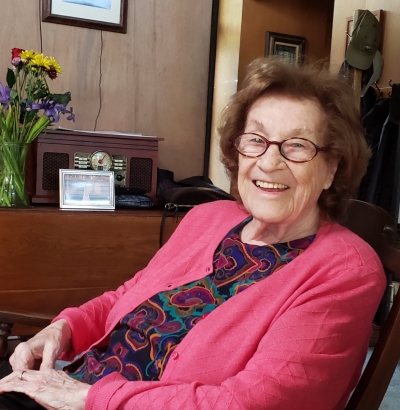 Patricia Marquis, 90, died peacefully at her home in Palo Alto on January 26, 2020 due to complications from a stroke. Patricia Marquis was born on April 4,1929 in Lansing, Michigan. She was raised with her biological mother, Dorothy Linebaugh Gibbs and her sister Priscilla Harden in her early childhood. Her father Dwight Gibbs was a jazz musician and Patricia had a lifelong love of music. She debuted as a tap dancer at age 3. Due to economic pressures of the Great Depression, she was adopted by her mother’s first cousin, Ethelyn Clay and her husband Darwin Clay. She enjoyed a stable and loving home with them and learned much about social justice from her father who was a prison reformer and music from her mother, a music teacher. She suffered from Undulant Fever from drinking unpasteurized milk and spent one year in bed from age 10-11. This condition can affect the heart and the doctors thought she would not survive past age 40. She was admonished never to exercise, but overcame this obstacle by becoming a flautist in the marching band in high school. Patricia graduated from nursing school, then earned a Master’s Degree in Maternal Child Health, and Nutrition at the University of Michigan. She met the love of her life, John Marquis, there on a blind date and they were married in 1959. She worked as a public health nurse and one of her passions was teaching nutrition through cooking. This helped her patients to eat healthy foods on a welfare budget and she researched ways to make regional recipes for her patients. Patricia moved to California with her husband when he was offered a position at the Veteran’s Administration. Their three children were born in Palo Alto, California. Patricia was an amazing feminist who was ahead of her time. She taught progressive muscle relaxation classes to pregnant women so that they could have natural childbirth. Patricia and John formed the Behavior Change Corporation and did research on helping individuals learn to drink moderately. When her husband John formed a private practice Patricia managed the billing throughout his career until he retired at age 80. Patricia opened the Blue Corn Indian Arts Store in the 1970’s, supporting Native American artists and bringing Indian art and jewelry to the Bay Area. She was one of a few select Anglos who were invited to witness the Hopi Rain Dance. Upon the closing of Blue Corn Indian Arts, Patricia attempted to return to nursing but found it difficult due to age discrimination toward older RN’s. This prompted She and a friend to start a non-profit, Options for 50 Plus, to assist older workers in finding employment. Later on She moved to Myer’s Flat, California in her sixties to run her nephew Peter’s Indian Jewelry store, living alone during the week with her husband joining her on weekends. Upon her return to Palo Alto, she began running the early online business of Sam Savage, Analycorp, which she continued into her eighties. Patricia was an amazing mother and would plan family trips with the children across country each summer to visit relatives in Michigan. These journeys included educational visits to landmarks and areas of interest, teaching them about history, culture and politics along the way. Brave and independent, Patricia often drove the entire way alone with the three children in their beloved red VW Bus or Motorhome. She and her husband also travelled to Mexico with the children, driving there every other Christmas. Later in their life, they travelled extensively to India, Cuba, Costa Rica, Nicaragua and Europe. Patricia and her husband were lifelong social activists. During the Vietnam War, they actively participated in the Anti-War Movement and instilled a strong sense of activism in their children. They were on the Watchdog Committee of the ACLU and helped to found the Ecology Center in Berkeley. Each year, she would walk the precinct and get out the vote, encouraging voters to endorse progressive candidates. She voted up until the end of her life. Patricia was a gourmet cook and collected over 3000 cookbooks in her life. She used her love of food to explore other cultures and instilled in her children a love of cooking. She celebrated holidays with bountiful and culturally authentic foods for every occasion. Following up on her earlier work with nutrition for her patients, she volunteered to teach children in the Head Start Program how to prepare their own nutritious breakfast. She taught her children that one can never be poor if one knows how to cook. Patricia knew the contents of the cookbooks in exquisite detail and helped to research recipes for her son Chef Neil Marquis and his colleagues. Socially, Patricia was active in her later years in the Stanford Faculty Women’s Club, eventually becoming president. She was the chair of the Stanford Faculty Women’s Mystery Book Club and the Stanford Faculty Women’s Cuisine Club for multiple years as well. Patricia’s first daughter Martha Hardin Thompson was adopted by a family in Michigan. This was a loss which she felt was mandated by the social mores of the times . In the last year of her life, much to the joy of the family, Patricia and Martha reconnected through a genetic testing website. They had a healing visit in June of 2019 and spoke almost daily throughout the rest of Patricia’s life. Over the course of her lifetime, Patricia and John brought many children and adults into their home, offering support and providing them with love. They considered many of these individuals to be their children including Jeanne Gitzen, Nadine Sady, James D’Andrea, and Bea Oliver. Their nieces and nephews lived in the home at various times, including David, Peter, Cathy, Carol, Sue, Michele, Danielle Michelle and Rachel. Patricia is survived by her four children; Martha, Neil, Priscilla and Paul, as well as Neil’s wife Janine and Paul’s wife Amanda, her seven nieces and nephews, her six grandchildren and seven great grandchildren, as well as the many individuals she had a deep and meaningful impact on along the way.

Photo Gallery
0 photos Upload a photo
Remembrances
0 entries Submit a remembrance
Memorial service
A celebration of her life will be held at her home, 3511 Ross Road, Palo Alto, California, Saturday February 15, 2020 at 2 pm.
Make a donation
Please give donations to the ACLU, Move On.org or Planned Parenthood in lieu of flowers.
About this site     Contact us