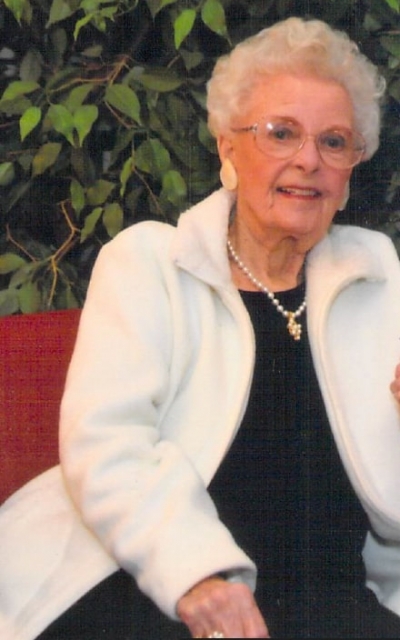 Patricia F. Robertson passed away peacefully on Monday, May 10, 2021 after several months of declining health. She was 101 years old. Pat was born on April 24, 1920 in Seattle, Washington. She attended the University of California at Berkeley but went to work full-time after her first university school year.

She met her husband-to-be at a fraternity party where he was president. The party was held at a Pleasanton, CA country club in 1942. The U.S soon entered World War II after the Pearl Harbor attack in 1941.

They got married on Jan. 29, 1943 with a honeymoon in Palm Springs CA. Thereafter, she served as a housewife along with her Army Captain husband. After the war ended, she waited for him while he remained with other U.S. troops in Tokyo for nine months.

He returned home becoming an insurance broker. After a short stint living in Menlo Park, she and her husband moved to Atherton in 1952. Later, she had three children Linda, Scott and Brad.

She was an enthusiastic traveler. Along with her husband, she traveled most of the world having gone on to 6 different cruises.

She is survived by her two sons, Scott and Brad.

Photo Gallery
0 photos Upload a photo
Remembrances
0 entries Submit a remembrance
Memorial service
The family will have a small family gathering for her Inurnment at Skylawn Memorial Park in San Mateo, CA on May 19, 2021 at 2 pm.
About this site     Contact us