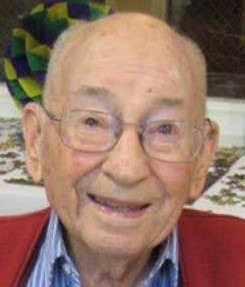 Noble Hancock was born October 1, 1921 in Aurora, Illinois and died at The Sequoias in Portola Valley on August 21, 2021 just six weeks short of his 100th birthday. He and his wife Lorraine had lived in the Westridge area of Portola Valley for 61 years where they raised their five children. They moved to The Sequoias three years ago.

Mr. Hancock grew up in San Jose, attended Willow Glen Elementary School, Los Gatos High School and UC Berkeley before WWII and later earned a Bachelor of Electrical Engineering from the University of Santa Clara and a Masters from Stanford. He also took business classes at Stanford.

During the War he served as information liaison in the US Army IV Corps Headquarters in the invasion of Luzon, Philippines.

As an avid amateur radio enthusiast he served as treasurer of the Santa Clara County Amateur Radio Assn. and was proud of the 1,000 watt transmitter that he constructed, which he used to make contacts throughout the U.S. and Pacific.

Mr. Hancock was an assistant professor of Electrical Engineering at SJSU from 1951-1961, served as Program Officer of the Luke B. Hancock Foundation in Palo Alto from 1961-1978, and spent his retirement years gardening, tending to his personal finances and writing his memoirs.

He was a generous supporter of the environment, homeless, and his church. His children remember him fondly for the stories he would read them after dinner, his buying a boat so they could water ski at Lake Tahoe, and his introducing them to the concepts of philanthropy.

Those celebrating his life are his wife Lorraine and their children: Joyce Gavino of San Jose; Bruce (Carolyn) Hancock of Altadena, CA; Janice (Jeff) Pettit of Auburn, CA; James Hancock of Alameda, CA; Allen Hancock of Eugene, OR and a daughter from a previous marriage Diane (Dan) Sheehy of Rolling Hills Estates, CA. They are joined by eight grandchildren, eight great grandchildren and one great-great granddaughter. The family will gather privately on Noble’s birthday, Oct. 1st. Friends and neighbors are invited to gather at The Sequoias on Saturday Oct. 2nd at 2:00pm to remember the gentle man with the camping stool. In lieu of flowers contributions may be sent to Second Harvest or The International Rescue Committee.

For questions or for the Zoom link contact [email protected]

Photo Gallery
0 photos Upload a photo
Remembrances
0 entries Submit a remembrance
Memorial service
Friends and neighbors are invited to gather at The Sequoias on Saturday Oct. 2nd at 2:00pm to remember the gentle man with the camping stool. In lieu of flowers contributions may be sent to Second Harvest or The International Rescue Committee. For questions or the Zoom link contact [email protected]
Make a donation
Second Harvest Food Bank https://impact.shfb.org/give International Rescue Committee https://help.rescue.org/donate
About this site     Contact us