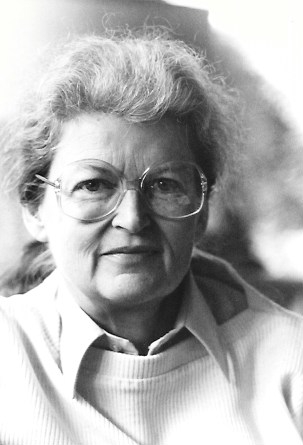 Nita Reifschneider was born in Ukiah, California, to John C. (Jack) and Olga (Wuertz) Reifschneider. In 1929, the family moved to Reno, Nevada, where her father opened the city’s first auto body shop. At age 14, Nita began driving — in a used Ford pickup truck from her dad’s shop. Nearby open spaces — Pyramid Lake, the desert, Mount Rose, and Lake Tahoe — were major influences on Nita’s lifelong interests in conservation and historic preservation.

She graduated from Reno High School in 1940 and entered the University of Nevada Reno (UNR) to study journalism. At UNR, Nita was president of her sorority, worked for the Nevada State Journal and the Reno Evening Gazette, and acted as a stand-in for film star Anita Granville in an ‘Andy Hardy’ movie. She received her Journalism degree in 1944.

The editor of the Redwood City Tribune, Ray Spangler, hired Nita that summer as a general assignment reporter. In her first job after college, she covered city hall, the San Mateo County Courthouse, and the founding of the United Nations in San Francisco. Nita also wrote a series that led to the formation of the Sequoia Hospital District and the building of Sequoia Hospital.

One day, Ray (still her boss) asked Nita to complete a golf foursome on a Thursday after work. It was to be their first date: they were married in 1946 at her parents’ Reno home. After marrying the editor, Nita was fired under the Tribune’s anti-nepotism policy. No one else would hire her as a reporter after that.

After Nita left the Tribune, Nita and Ray built their first house on Upland Road in Redwood City and began raising a family: Jon, Mary, and Thor were born at Sequoia Hospital. She helped design their second home on Edgewood Road in 1959: it became a gathering place for family holidays and neighborhood celebrations.

While raising three kids, Nita became actively involved in school issues, and preservation of parks, open space, and historic sites. She also researched the activities and identity of the elusive Major Frederick Dodge before, during, and after the Paiute Indian War of 1860-61.

She served two terms as President of the San Mateo County Historical Association (1964-1966). Nita also wrote Redwood City’s 1967-1968 Centennial Celebration pamphlet. With other members of Redwood City Citizens Against Racism, she urged the school districts to deal constructively with their racial imbalances and conflicts.

Nita founded the Portolá Expedition Bicentennial Foundation in 1966, serving as its first president. She convinced the San Mateo County Board of Supervisors to purchase the discovery site and the National Park Service to designate it as a National Historic Landmark after the Department of the Interior had turned down two prior applications.

When Ray retired in 1969, Nita went back to work as a reporter for the Country Almanac in Woodside, covering the Sequoia Union High School District’s struggles with desegregation (1969-1977).

Nita served on and chaired the San Mateo County Scenic Roads Committee (1967-1976), when it obtained State Scenic Highway designation for the county’s portions of Skyline Boulevard (State Route 35), Highway 1, and Interstate 280. She championed east-west pedestrian, equestrian, and bicycle access across the proposed I-280 freeway.

She served for 14 years (1983-1997) on the San Mateo County Parks and Recreation Commission, a record of service on that body.

Nita helped the Friends of Edgewood Park revise the 1997 Edgewood County Park and Natural Preserve’s Master Plan, which helped keep it from becoming a golf course. In 1996, she was named the “Best Friend of Edgewood Park.” Nita Spangler is survived by three children, five grandchildren, and two great-grandchildren.

Memorial gifts in honor of Nita Reifschneider Spangler to the University of Nevada Reno Reynolds School of Journalism, the Peninsula Open Space Trust, and the Friends of Edgewood are requested.

Photo Gallery
0 photos Upload a photo
Remembrances
0 entries Submit a remembrance
Memorial service
Her public memorial service will be at 10:30 AM, Saturday, June 1, in Courtroom A at the San Mateo County History Museum, 2200 Broadway, Redwood City, CA 94063.
Make a donation
Memorial gifts in honor of Nita Reifschneider Spangler to the University of Nevada Reno - Reynolds School of Journalism, the Peninsula Open Space Trust, and the Friends of Edgewood are requested.
About this site     Contact us