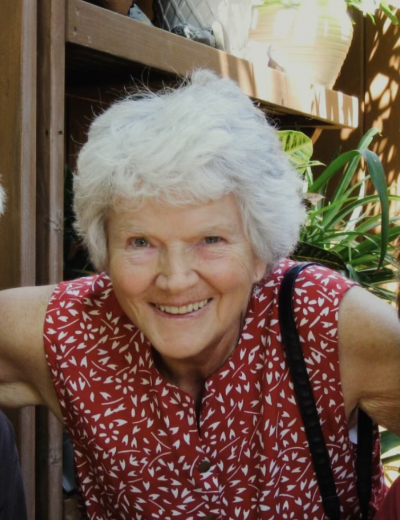 Nancy Elizabeth Valentine passed away on October 19, 2022, a few days after celebrating her 67th wedding anniversary with her husband, Paul. Nancy lived a rich and fulfilling life, actively engaged in making the world a better place, enjoying nature and travel, and putting family first.

Nancy was born Nancy Elizabeth Hodge in Niles, Ohio in 1931 where she lived through high school. Being born into the Depression instilled in Nancy the values of appreciating what you have, never wasting anything, and conservation. Nancy attended Ohio Wesleyan University and graduated from Miami University of Ohio where she met Paul – their marriage was a “Miami Merger.” Before having children, she taught first grade in Cleveland, Ohio; Natick, Massachusetts; Columbus, Ohio; Lancaster, California; and Palo Alto. Later in life, Nancy taught English as a Second Language to recent immigrants from China.

Nancy and Paul married in the First Presbyterian Church in Warren, Ohio, on October 15, 1955, in “one of the loveliest autumn wedding ceremonies to be solemnized in Warren…with vases filled with white chrysanthemums interspersed with palms and ferns.” (Warren Tribune Chronicle.)

In the late 1950s, Nancy and Paul did something that, although more common today, was uniquely adventurous for the time. Taking advantage of Paul’s military privilege to “hitch a ride,” they took a year to travel around the world on troopships and freighters. Travel was an important part of Nancy’s life as she loved to immerse herself in other cultures and to celebrate diversity. Family trips took her to Africa, Asia and Europe. She traveled to Mexico City in 1975 to celebrate International Women’s Year. In the era of Perestroika, Nancy traveled with a Creative Initiative film crew throughout the former Soviet Union interviewing people in all walks of life for the film The Spirit of the People. She never tired of talking about the Serengeti Plain, perhaps her favorite place on Earth.

After starting a family, Nancy was a full-time volunteer for Creative Initiative for 30 years and was a founder of Beyond War and Portola Green, a community living development in Portola Valley. Nancy and Paul moved to Sacramento in 1986, to lead Beyond War’s Northern California effort. They loved Sacramento so much, they stayed for 20 years.

Nancy was deeply spiritual. In Sacramento, she studied Chinese Medicine, became a Healer in Plant Spirit Medicine, and started a practice using those techniques until she moved back to the Bay Area. Nancy loved gardening and grew many of the herbs used in her practice.

In 2009, Nancy and Paul moved to The Sequoias, a retirement community in Portola Valley, where Nancy served on several committees, including the Welcoming Committee, the Health Services Committee, and the Residence Council.

Nancy loved the arts. She and Paul were season ticket holders of the San Francisco Symphony for many years, and enjoyed the opera, museums, and Broadway musicals. Nancy had a fantastic memory for lyrics and poetry, and taught her children and grandchildren many songs, limericks and poems.

Nancy is survived by her husband Paul; her children Amy, Lucy and her husband Brad Wurtz, Andrew and his wife Alice; and her seven grandchildren Zachary, Ryan, Henry, Kelly, Leo, Daphne and Emma.