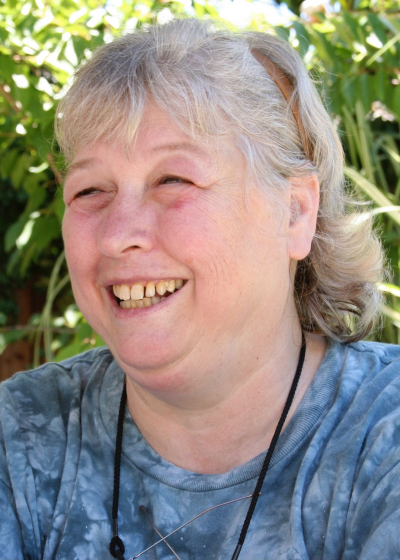 A memorial service will be held at the Unitarian Universalist Church of Palo Alto.

Nancy was born on January 6, 1949, in Denver CO, to Marian Annette DeTrude and James Charles Westerfield. She grew up in Kansas City, MO, Richmond, VA, and Princeton, NJ, with her four siblings. When people asked her where she went to school, she liked to joke that she “graduated from Princeton” — Princeton High School that is, class of 1967! She married Dick Robinson in 1968, moved to Massachusetts, and had her daughter Kyrie in 1969. She then married Scott Garren and had her daughter Zoë in 1972. She moved with her girls to the Bay Area of California in 1974 to be closer to her own father, Jim. She met Walter Main there in 1978 and they married in 1986. She moved to Corvallis, OR in 1990 to be closer to her daughter Zoë, who was attending college there. She moved back to Davis, CA in 1997, then back to the Bay Area in 1998. She lived in many places and made many friends!

Nancy supported her children after her divorces by waitressing, but quickly joined the ranks of women who wrote code in the late 70s. She then worked in technical support and administrative roles for the next 40+ years, never choosing to retire.

Nancy grew up attending the Unitarian Church in Kansas City, and when she moved to Palo Alto she became a member of the Unitarian Church there for 20 years.Over that time, she was also the church administrator and a beloved and stalwart member of numerous groups, such as the Adventurers, a Covenant Group, and a women's group.

In 2003 she was delighted to welcome her first grandson and then twin grandsons all within three days. Her fourth grandson, Tommy, came along three years later. All the boys fondly remember “Nana’s workshop”, when she would bring them to her house for an afternoon of arts & crafts. In 2010 she was reunited with her firstborn son Lewis, whom she had been compelled to give up for adoption while in high school. She was delighted to welcome Lewis and his boys Crosby and Sawyer into the family.

Nancy was an avid reader, a movie buff, and a diehard Star Trek fan. She loved arts & crafts and creating various items for her family and friends — knitted hats, sweaters and mittens. She taught her children to bake pumpkin pie and sew, and she loved the holidays and singing Christmas carols in the car.

Nancy had chronic illnesses for 23 years, some of which contributed to numerous brushes with death. She battled back over and over with amazing good cheer.