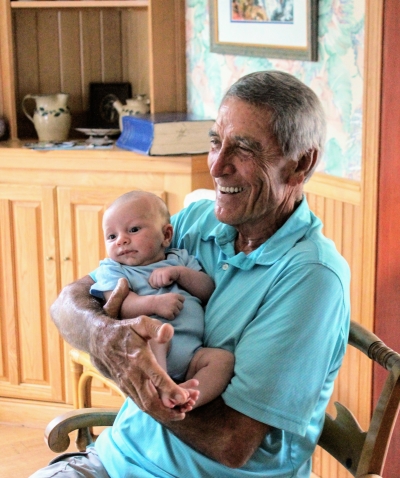 Marz J. Garcia, beloved father, grandfather, brother, uncle and dear friend to so many, died of complications stemming from a head injury at the age of 83 on September 8, 2020. He was the third of five brothers born to Francisco and Mariana Garcia in the Bronx, New York. He lived a unique story and left behind a multitude of friends and family whose lives he had deeply impacted.

He lifted himself from a hard-scrabble upbringing on one side of the continent to a varied and highly successful career and personal life in California. Stops along the way included teenage reform school at Lincoln Hall in New York (where he later came back to speak as a success story), a US Army posting in Germany, undergraduate study at Ohio University (where he met his wife Nancy and formed life-long brotherhoods within the Phi Delta Theta fraternity), several graduate degrees in economics and law, and ultimately a move to California to begin a successful career in banking, finance and politics in San Francisco and Menlo Park, CA, where he raised his family. He served as a State Senator in the California Legislature representing San Mateo County from 1978 - 1982 and functioned proudly as a political outsider who followed his principles over political gain. After leaving the Senate he continued serving the public in high-level appointments within former California governor Pete Wilson’s administration for several years. After his time in public service he had a variety of entrepreneurial pursuits, as well as a stint teaching business classes at Menlo College.

He was an avid traveler, skier, tennis and pickleball player and draft beer enthusiast, who introduced his two sons Marz and Quin to many of these pursuits. He and Nancy enjoyed a decades-long passion for tennis both as rivals and partners - their career series as opponents has been declared a draw. Throughout his life those who met him appreciated his unique, well-considered and principled views on almost any topic. In his 80’s he remained incredibly vigorous; traveling, maintaining friendships, exercising daily, actively investing, working on home improvement and enjoying his family.

He believed in self-reliance, but never failed to offer a helping hand to those in need, be they friends, family or strangers. In his final few days those people surrounded him and his family, sharing stories validating the impact he had on so many lives. He is survived by his wife of 55 years Nancy, son Marz and daughter-in-law Ferol with grandsons Marz and Rhys, son Quin (expecting a daughter in Spring ‘21 with his partner Theresa Strawn), younger brother Mel and extended family in New York, and an array of deeply treasured friends from throughout his life.

Photo Gallery
0 photos Upload a photo
Remembrances
4 entries Submit a remembrance
From bob johnson
Oct. 27, 2020
Marz was a tennis buddy. Always a good friendly competitor, and an excellent player. I was lucky to have known and played Marz, a great guy!
Memorial service
Planned for October 10, 2020 - details pending
About this site     Contact us